When I first heard of Krypton, I thought ‘Great! We get to see more of Superman and Supergirl and their life on Krypton before it explodes!’ You can imagine my delight when I read the synopsis and discovered that Krypton will follow Superman’s grandfather, Seg-El, who fights to redeem his family’s honour and save his beloved world from chaos after being ostracized and shamed. I am a HUGE Supergirl fan, and just about had a permanent smile on my face for about a week after finding out that we get to learn more about her family.

Krypton opens with your typical run of the mill exposition monologue, with some pretty sick special effects showing Rao, Krypton and Kandor City, the city in which Seg-El and the House of El live, before we see a flash of a familiar looking cape – a rather iconic red cape with the glyph of the House of El on it. Except, the colour of the crest is all wrong! I am totally here for the red and blue combo, and thankfully we don’t have to wait too long to get rid of the black and blue version.

We open on to a chamber filled with what appears to be the entirety of the Law Guild, being presided over by ‘The Voice of Rao’ who is wearing a pretty amazing three faced golden mask. 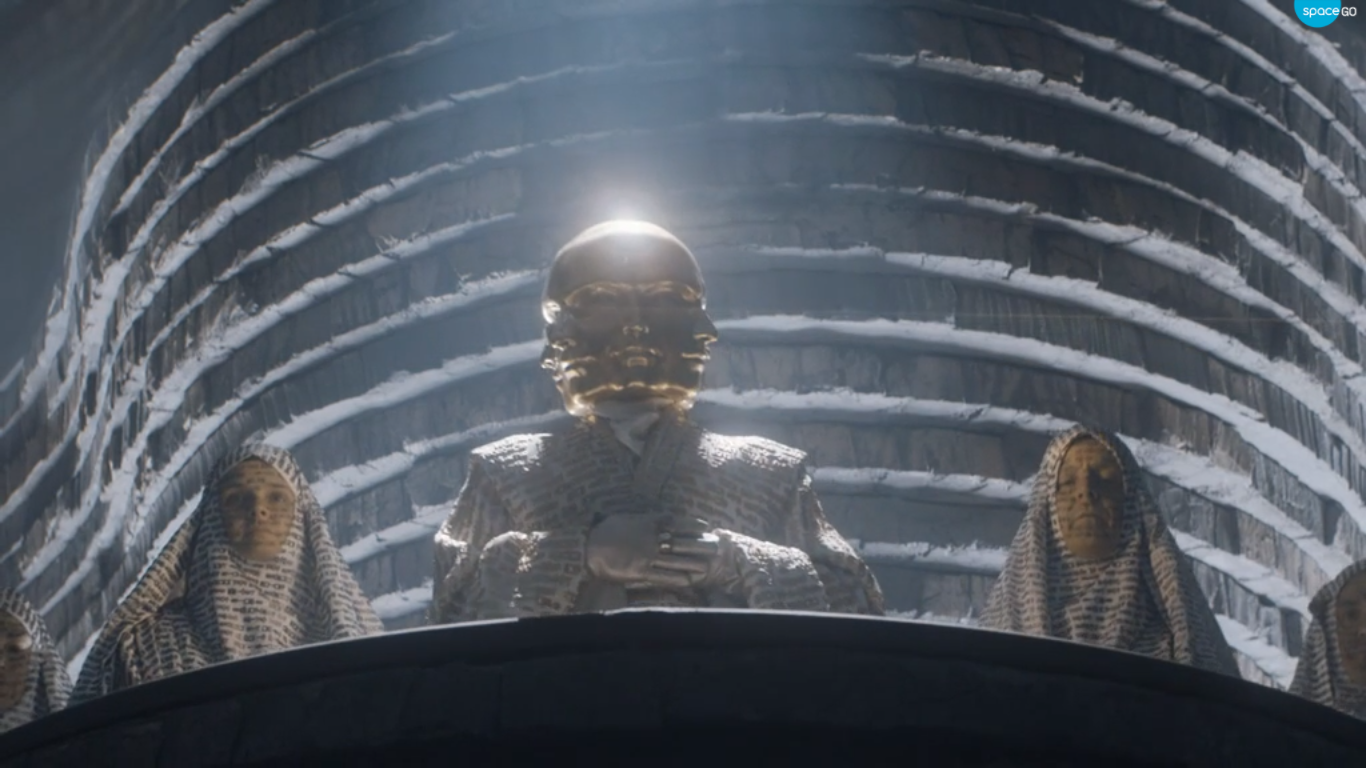 Daron-Vex, who is the chief magistrate of Kandor, offers Val-El the chance to prove his loyalty to the Rao wannabe (after proclaiming that they are not alone in the universe and that Krypton is vulnerable), and like a BAMF, he declines and is sentenced to death.  However, death seems to not be enough for Daron who, watched over by Rao, then strips House El of their name and their rank – he even goes so far as to rip the house crest off the chest of young Seg-El himself! But being sentenced to death on this planet is not that simple. The Kryptonians like to make you stand on the end of a bridge – which you can only access by going through a magic barrier which shields Kandor City from the outside world – and then literally pull the floor out from underneath you! Just a little bit different from the usual short stop and a sudden drop.

Flash forward 14 years and young Seg has certainly grown up – enter Cameron Cuffe as Seg-El! Our young Seg has now gotten himself involved in brawls down at his local bar, beating up law officials for money, and pulling off some hilarious one-liners while he is at it. After a night of some good, honest work, Seg returns home to his loving family abode. After one good chastising from his father, Ter-El,  it’s time for a heart to heart with his mother about using his brains, and we move on to see some badass women at work in the Military Guild. 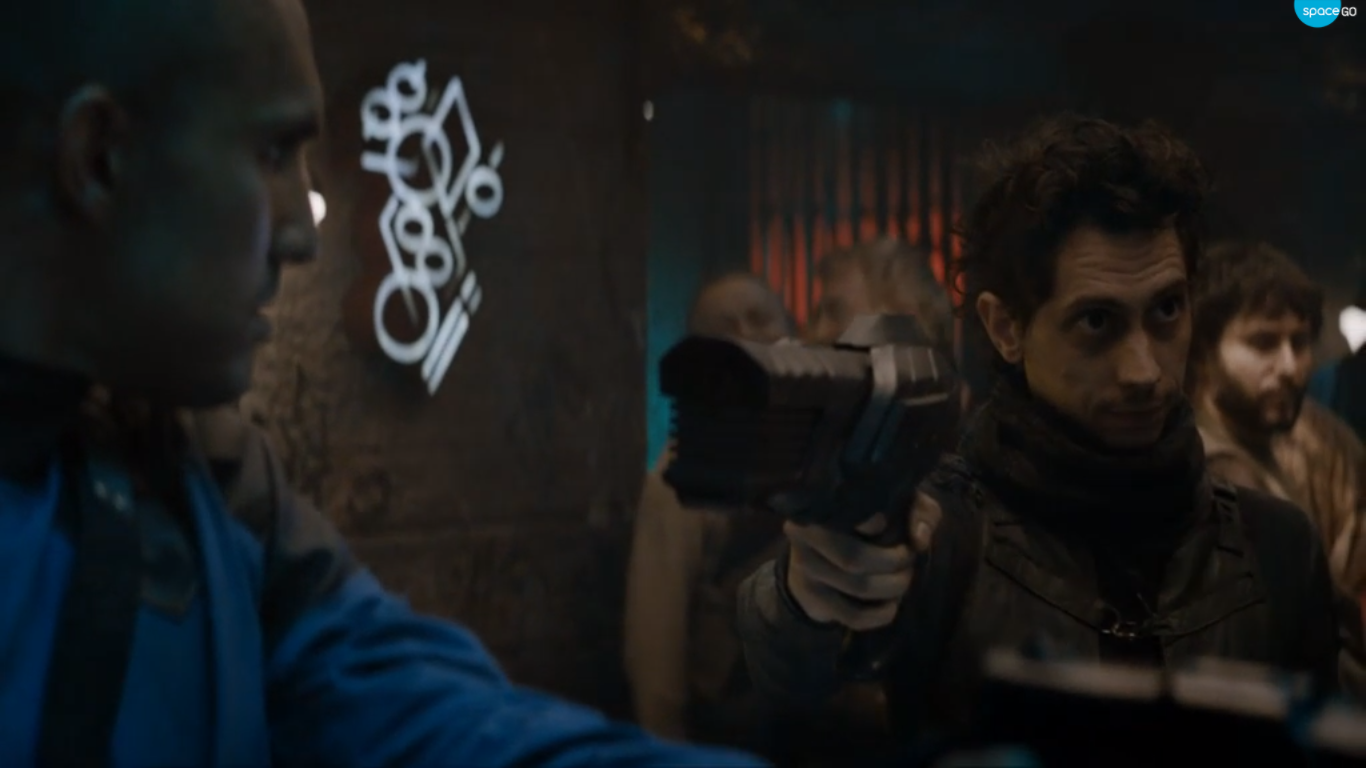 Insert “My dick is bigger than yours” here

At the Military Guild, we are introduced to the Zod Family, led by Jayna Zod (a name we are familiar with in the infamous General Zod), and her daughter, Lyta. Both mother and daughter seem to be as fearless as each other, and the resulting training fight ends in Jayna putting a knife through her Lyta’s hand in a lesson about never giving mercy.  I would feel safe leaving the security of any planet in their hands, but maybe not any children unless I want them to become a human dart board.

At the Lawmakers Guild, we get to see our favourite Three Faced Sun God again, and witness our hero, Seg-El, take down a man who has a bomb in his arm (um what?) and is calling for the death of The Voice of Rao. This one action seems to redeem the member of the shamed House of El, and Seg starts the process to become ‘ranked’ , gets a the ability to join a guild and is now able to ‘bind’ with someone.All of this is thanks to the Genetic Council, who have agreed to let Seg join the Science Guild and become a Vex by binding with Daron-Vex’ daughter, Nyssa.

On his way home, Seg meets our time travelling space man – Adam Strange – who true to his name, spins a wild tale of someone coming to change time to prevent Superman from being born and leaves Seg-El with a sunstone bearing the family glyph and instructions to find the fortress. Seg, using his brain and not his brawn for once, runs straight home to his parents, who confiscates the sunstone citing that the glyph is banned, and that Seg cannot risk being caught with it now that he is about to be ranked – an offer we learn is for Seg only and that Ter-El and his mother, Charys-El, will not be able to reap the benefits from. 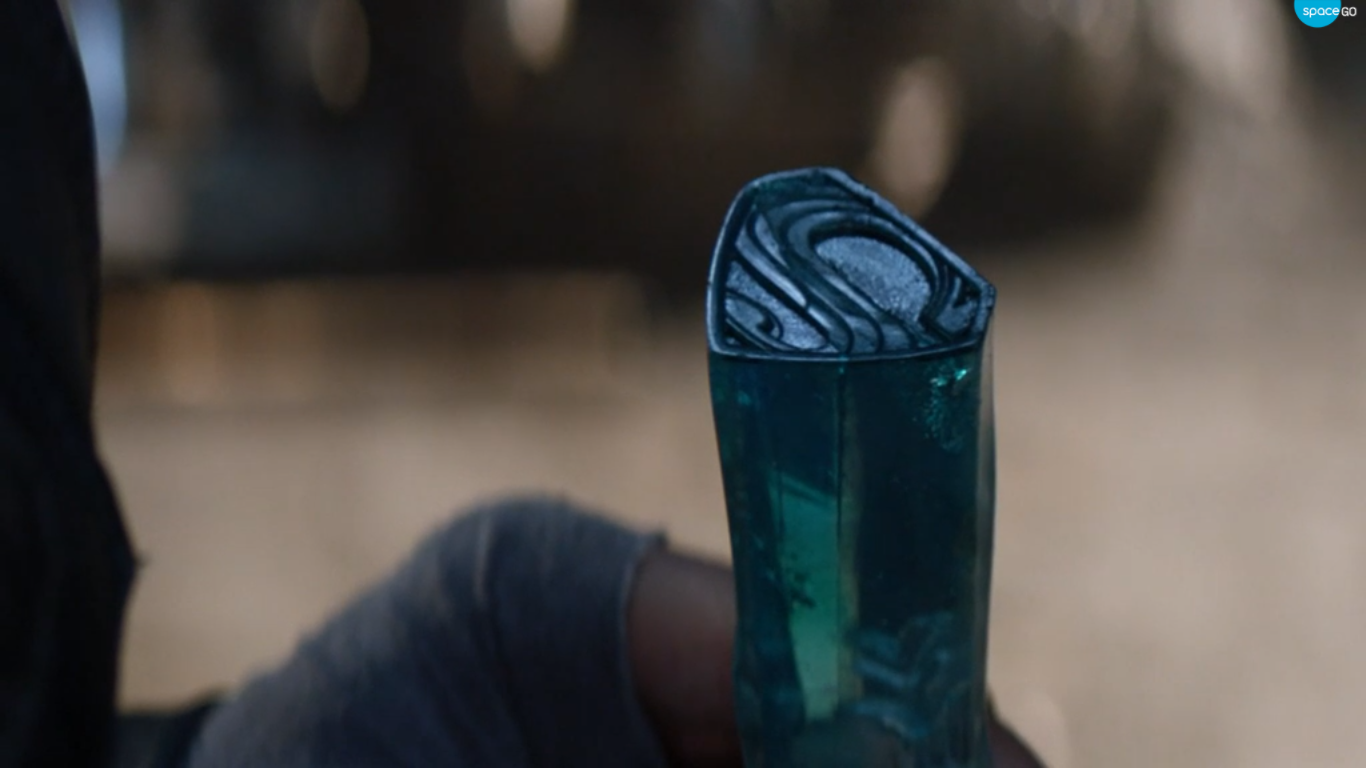 If only we had keys like that here, maybe I wouldn’t lose mine so often.

In the Genesis Chamber, a feat of Kryptonian engineering to genetically modify and create the future children of Krypton, we get to meet Seg’s bonded, Nyssa, and learn about the future of their child Kor-Vex, who will be a Lawmaker and live 173 cycles. Such detail seems strange to Seg (and to me) who thinks it’s wrong that he knows exactly how their sons life will play out. Nyssa it seems has a little crush on Seg, who runs straight in to the arms – and bed – of Lyta-Zod.

Our little Seg seems to like running in to the Military Guild goons, who find the sunstone that his father had confiscated from him, and has to rely on mommy dearest and her stolen space car to get him out of his bind. Charys-El, and the skimmer, break through the magic barrier of Kandor, and find their way to Val-El’s Fortress of Solitude.

Personally, I don’t get why the House of El have their Fortresses of Solitude out in the snow and ice, but they seem to like the cold. Who knows, maybe there is something in the Kryptonian engineering which means that something they build it out of that has to be kept in Arctic tundra! The fortress, it seems, is the cause of everything bad which has happened to the House of El, and is the secret hiding place of Val-El’s work in finding an alien presence which is coming to destroy Krypton.

The Military Guild seems to have a brain somewhere, and they find the stolen space car and track it back to our heroes humble abode. Charys, ever the loving mother, hides Seg in a hole in the wall and takes the blame for the stolen space car and claims she works for Black Zero. While on trial, Charys repeats the Val-El party line that the Kryptonians are not alone in the universe, causing outrage in the court room. Daron-Vex, leading the trial of yet another member of the House of El, questions Charys over who else was in the space car (I know it’s called a Skimmer, but space car seems cooler), and forces Ter-El’s hand in taking his sons place beside Charys accused of treason. Seg, in the court room again for his family members, is forced to watch as Ter and Charys are murdered in front of him. Back at the spot where Seg last saw his grandfather, Lyta comforts our grieving hero before he becomes Broody McGhee and decides to break things off with her.

At the Fortress of Solitude, Adam takes a well deserved right hook to the face, and challenges Seg to step up to save Kal-El by pulling out Superman’s cape which is slowly fading like the rose in Beauty and the Beast. It turns out our ‘Big Bad’ of the season is a green skinned, black eyed alien with slithering hair called Brainiac, also known as the Collector of Worlds, and it’s up to Seg to stop him! 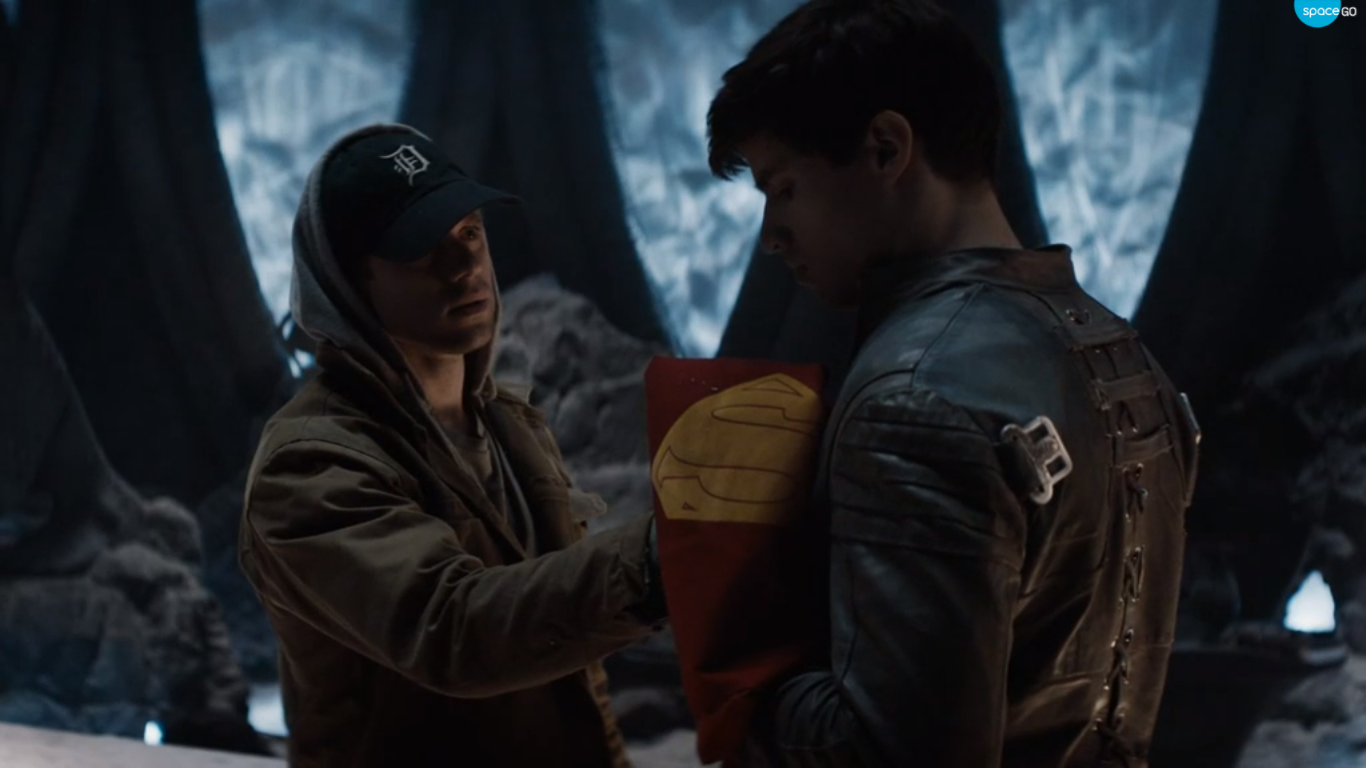 ‘Thanks for the cape Adam, but what am I supposed to do with it?’ – Seg, probably.

Now that we know the beginnings of the backstory of the House of El, I can see myself falling in love with this show. For starters, unlike the Arrowverse shows (Arrow, The Flash, Supergirl, Legends of Tomorrow), this show is on Syfy, and most of the shows I have fallen in love with have come from this broadcaster. I’m also a sucker for visuals, and the effects in this show have been amazing thus far. I cannot wait to see what Episode 2 brings and from the promo, we get to see more of the Fortress, some sort of rebellion from Lyta and a badass kick from Nyssa.