I think that pretty much covers episode 2, now on to episode 3: The Rankless Initiative!

Episode 3 opens in the Fortress with our heroes calling on the hologram of Val-El to examine Brainiac’s probe. After a quick analysis, we find out that it is actually just a shell and when it opens, a sentry is released. The sentry is a parasite and when it takes over a host’s body, it seeks out as much information that it can about the hosts home planet and uploads it to Brainiac, giving him all the information he needs in deeming if a planet is worthy enough to take over. Adam suggests opening the probe to deactivate it, and upon opening it, there is nothing there. The probe has already found its host!

Cut back to 3 days earlier and we get a really nice special effects piece of the probe flying out of Brainiac’s ship and flying through the galaxy until it crash lands in the Outlands.  Rhom and Ona (the mother and daughter paying their respects to Seg’s parents in the previous episode) are eating in Kem’s bar. Rhom doesn’t make enough money from her job to feed both her and Ona and has taken on a new job in the Outlands to try and make some extra cash.  She stumbles across the pod and opens it.

Back in the Fortress, the boys are having a little pow-wow trying to find out how to find the sentry, realizing that the salvage crews take what they find for themselves. Adam heads off to the Black Market and Seg goes to his lover Lyta to see if anyone has handed it in.

Seg runs into Nyssa first and the dress that she is wearing that covers one shoulder and is cut out on the other is absolutely STUNNING on her! She doesn’t stay long, telling Seg that she has her own secrets and tells Seg that Lyta fought Quex-Ul in the Kryptonian Duel. Seg confronts Lyta, who stands up for herself and lets Seg know that it was for him and the Rankless that she did it. 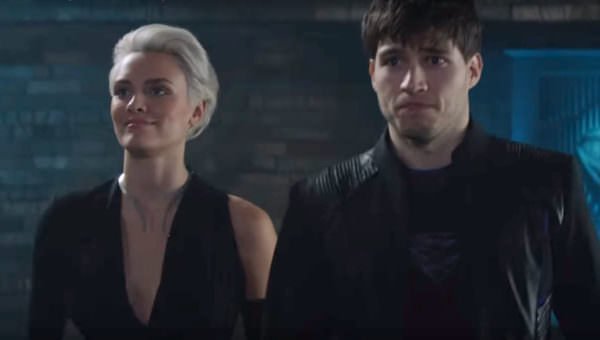 Nyssa can wear this dress in every episode, right?

Daron-Vex is now before The Voice of Rao informing him of the Rankless Initiative and is completely shaken. The Sagitarii  are in their command center discussing their plans for the initiative, with Lyta sanding up for the Rankless before her mother and Daron-Vex, calling for a peaceful way to root out Black Zero. Smartly, she exclaims that the Rankless know more about Sector 19 than they ever will, and that taking their time to get to know the Rankless will bear more fruits than it would to go in guns blazing and evict them.

The party at the bar is now in full swing (by party I mean day drinking), and the gang has been coming up empty-handed in finding the sentry. Kem actually makes a good point in that it is EXTREMELY difficult for them to go around asking complete strangers if they have found any alien tech recently.

Jayna calls Lyta out for her actions as she knows EXACTLY who lives in Sector 19 – Seg – and knows that Lyta’s objectivity is clouded by her feelings for Seg. In the armory, Lyta is with Dev – her bonded – and he eases her pain by telling her that it’s ok for her to doubt what she’s done, but she is now in a position of power and cannot let others see those doubts, or they will start to doubt her. They know that they have orders, and Dev reminds her that she may not like those orders, but that they cannot pick and choose which orders to follow.

At the Black Market, Adam finally has some luck in finding the sentry. Rhom had sold it earlier to try and get some more money to help herself and Ona. Being Rankless means that the only jobs you can do are the worst of the bunch, for very little pay, poor housing and a possible life of crime. Adam faces the same problem in that he cannot come right out and ask the market stall owner that he is looking for alien tech, but spies it up on the shelf anyway. Adam being Adam in he doesn’t have any money, runs off after tricking the owner to look the other way.

Lyta is now in front of her troop and is explaining to them that the Rankless are not their enemy, that Black Zero is. She calls for no shots to be fired on the innocent Rankless, and that no one fires unless she gives the go ahead. Lyta in a position of command is truly a thing of perfection. She looks so at home at the head of her people stating ‘May Rao’s race be your shield’ before turning away and walking out of frame with her undercut. 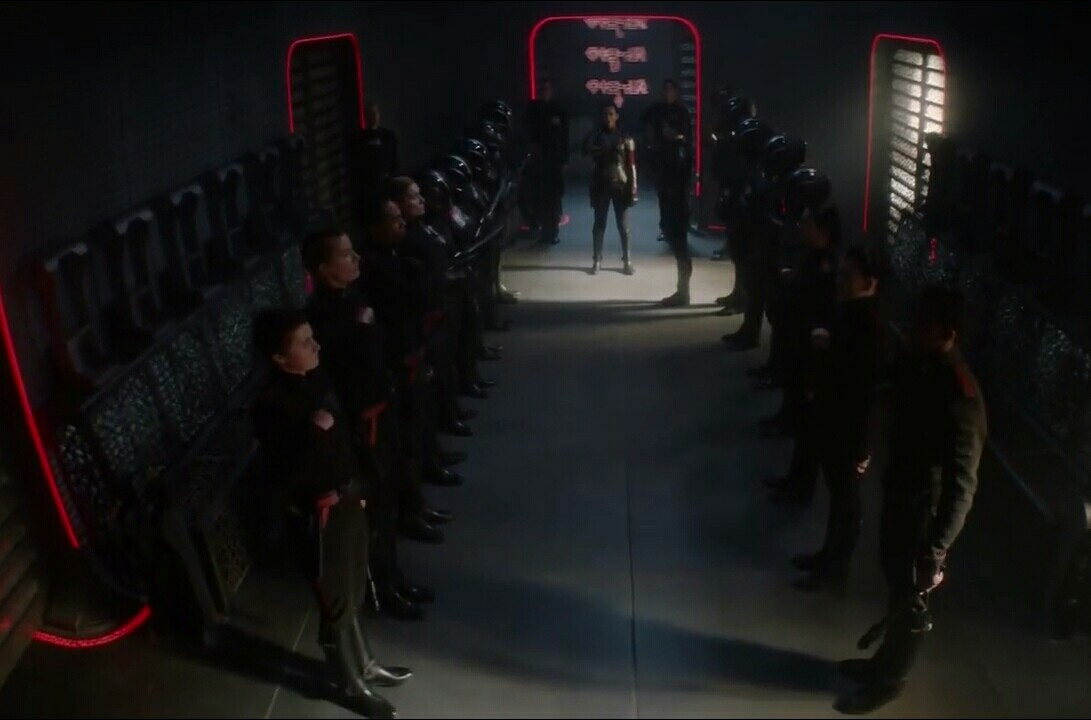 Lyta was BORN to stand in front of the Saggitarai like this!

Adam, after getting away from the stall owner successfully, appears in Kem’s Tavern with the sentry. After being denied a fist pump, Seg, and Adam attempt to go back to the Fortress, but get caught up in the eviction of Sector 19 by Lyta’s Saggitarai forces. The Rankless are understandably scared and confused, and the Sagitarii use brute force to corral them in the one area, guns trained on them. Seg leaves the sentry in Adam’s possession and Seg confronts Lyta over the presence of the Sagitarii in Sector 19 and chews her out for not telling him of the ‘invasion’.

In the Fortress, Adam and Val are busy working on the Sentry and Adam asks Val to have a look at a device he created which brought him to Krypton in the first place, except it won’t work anymore and he is now stranded on Krypton. Red lights go off and the tests results are in – the sentry has infected someone! Rhom and Ona are two of the people caught up in the eviction, and Rhom is now suffering from a case of a green light in her arm which is turning it black. Black arms aren’t the only thing that comes with the parasite, Red eyes and a super case of steroid injections, and she takes on the Sagitarii one by one before leaving little Ona with Kem and walking off. They flee to the Tavern to wait on Seg, who now discovers that it is Rhom who has been infected with the parasitic sentry, and promises Ona that they will do everything they can to save Rhom.

At the checkpoint, some of the Sagitarii  are being loaded into body bags and one of Lyta’s members goes rogue trying to get retribution for their death. She attacks one of the Rankless trying to find out where Black Zero is and shoots an innocent bystander who demanded the release of the man she was questioning. Predictably, the rest of the Rankless rebel. Lyta comes in (sans horse) to save the day! Upon finding the dead Rankless man on the ground, like a BAMF, she takes the side of the Rankless and orders for the arrest of her Saggitarai officer, Kol-Da, for the murder of the Rankless man. This gains her some credibility with the Rankless as after this move, she asks the Rankless to disperse or face imprisonment and the do so peacefully. 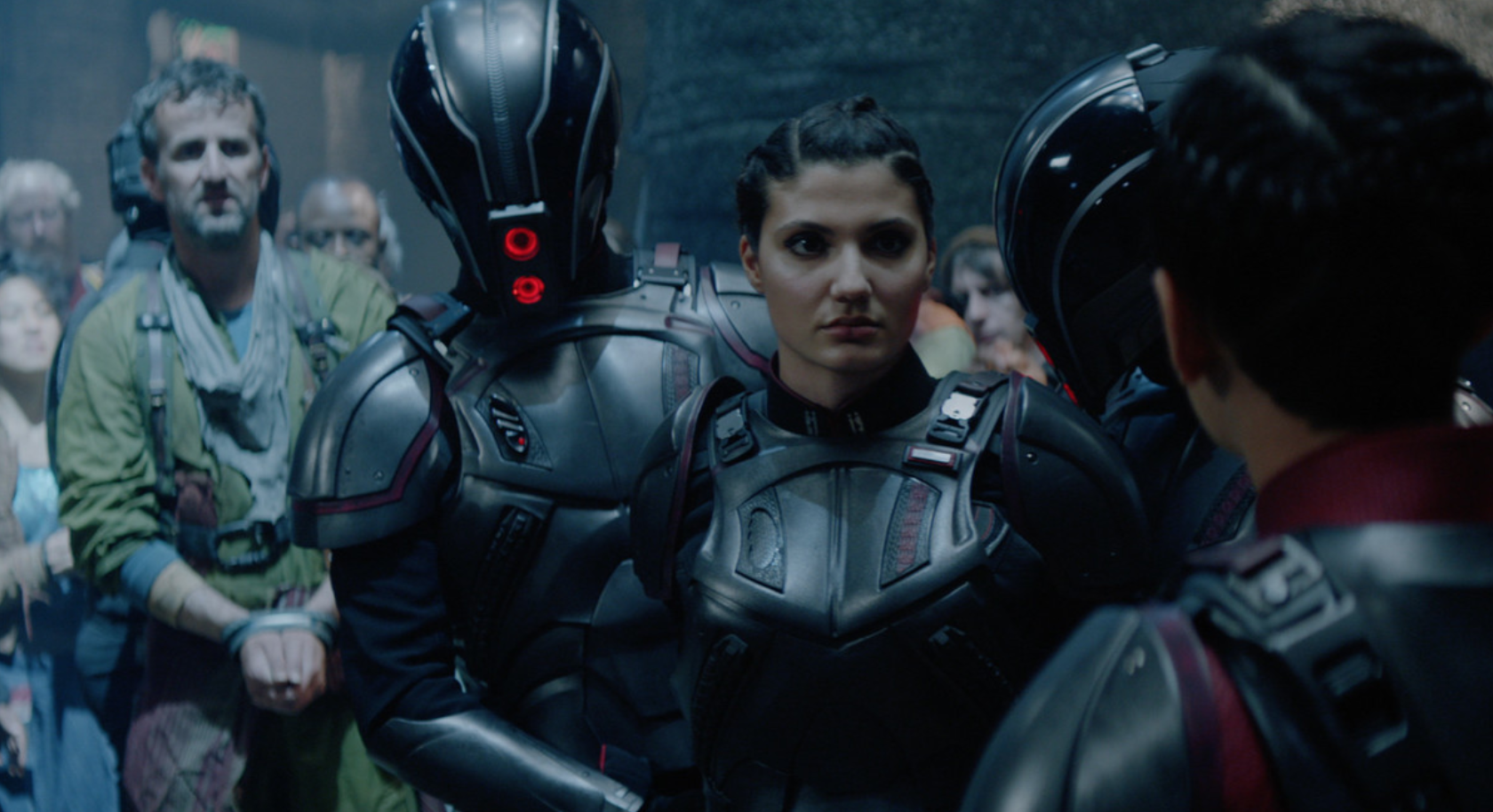 Finally, someone stands up for someone who is not the police. All hail Lyta!

Seg is still looking for Rhom, and Adam suggests a communication center. Seg finds Lyta and asks for some military grade tech to help take down the sentry controlling Rhom. Seg asks for Lyta’s trust, and seeing his desperation, she hands over the electrostatic grenade. Jayna, from the command center, issues orders for Lyta and her Saggitarai to move into the communication center to take on a possible Black Zero breach and in her trust for Seg, defies orders and turns off her comms.

Seg enters the communication center and sees Rhom strung up with cables and attached to the main communication podium. She pulls the line ‘There is no Rhom’ in a creepy AF voice and attacks Seg stating that Krypton is ready for collection. After Seg brings up Ona, Rhom seems to come to a little, allowing Seg to use the grenade and shut down the power in and around the hub. 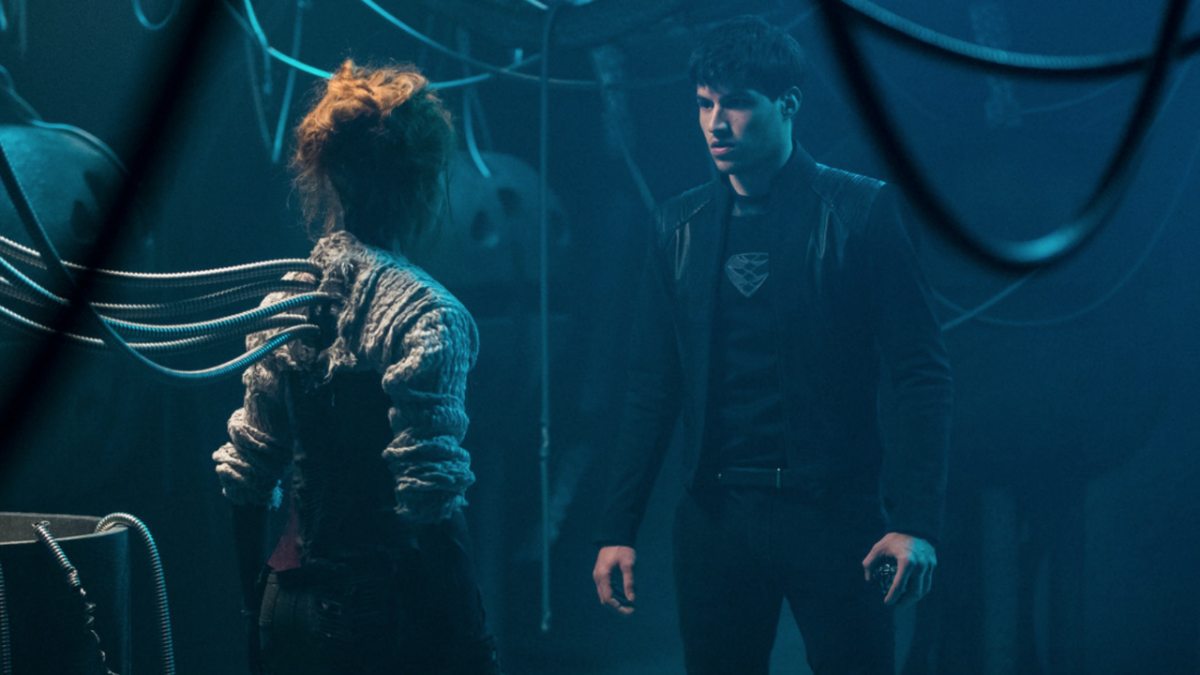 Seg has managed to get Rhom outside and Lyta finds them. Rhom still has the wires out of her back and is barely alive. Seg lets Lyta know that Val-El was right, that they are not alone in the universe and that the thing that took over Rhom is coming for Krypton. Lyta asks for Rhom to be turned over to the council to make them believe him and his family. Seg, however, cannot allow that on his conscience. In the Fortress, the gang tries to save Rhom, as she is still alive. Val believes that Rhom is the transmitter and has already sent Brainiac the message that Krypton is ready to be collected.

And that is it for episode 3!