We open with a nice training montage of Jayna on the Bridge of Doom – the bridge that they killed Val-El on. One of her ancestors is giving a thoughtful piece of exposition about what it means to be a Zod – be ‘a warrior whose courage, honor, and loyalty to the state are without equal and without question’. These scenes of Jayna training are harsh, showing her to be the badass we all know while landing blow after blow against her opponents.

Seg is still in the Outlands with Black Zero following his blood trail. He is, surprise surprise, without any supplies, and he won’t last long out there for long with his injuries. It’s a good thing then that he finds cover in a cave relatively quickly and stocks up on some weapons and a broken communicator. He somehow manages to find a woman who is being held captive and saves her, with her leading him to safety. 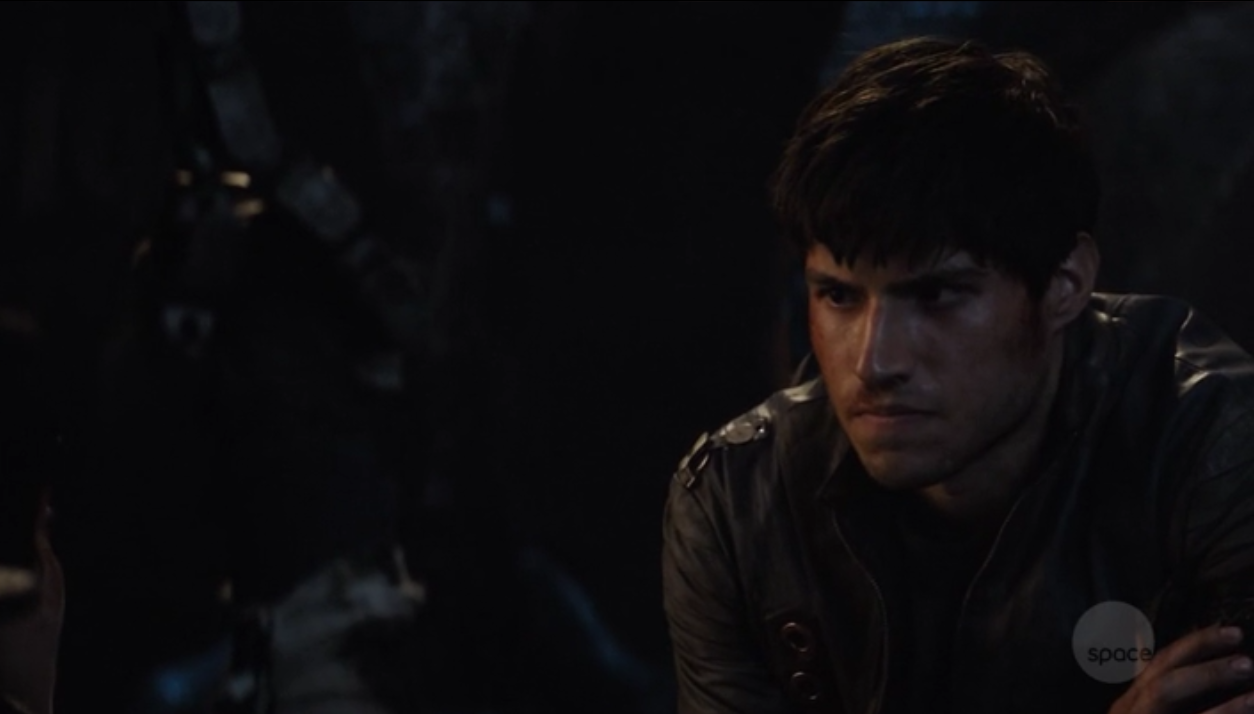 Take me to your leader!

Lyta is still being held in her cell and is inspecting her necklace before Dev-Em pays her a visit, asking them to lower the barrier. He doesn’t believe that she is a Black Zero Operative, and reminisces with her about the night they met. They met 18 cycles ago at a dinner, and Dev-Em uses some very poetic language to say that it was love at first sight. Lyta it seems is quite the prankster and she tried to ‘improve’ the ceremonial fire, causing Dev-Em to take the blame for it. Poor baby Dev-Em doesn’t think that Lyta loves him in the same way he loves her, but she loves him in her own way and gives him a sweet smack on the lips.

Adam is now worried about Seg as he can’t get a hold of him on his comms. Kem argues that he is laying low because Lyta has been scheduled for execution, and not getting any help from Kem, Adam storms off to find Seg.

Seg is still in the tunnels with the woman -Raika- who was being tortured for trying to protect something. Seg, while carrying her to safety, finds his house sigil on the wall in the tunnels before being ambushed by Raika’s people who have managed to procure guns from somewhere. Finding the stone that Ona gave him, they realize that Seg is an El and take him captive.

Nyssa finally makes her first appearance and is in the Lawmakers Guild with Daron arguing over her approach of Jayna to sway her to their cause of overthrowing Mr. Gold Face. Nyssa argues that Jayna’s love for Lyta will sway her to their side, but Daron isn’t so sure that if she does, then it won’t stop her from informing Mr. Gold face. Nyssa recognizes the threat that Lyta’s execution poses to their plan, realizing that if Lyta is killed, they lose all sway they would have had with Jayna to make their better Kandor. Daron-Vex is not stupid and understands that either way, Mr. Gold Face is either going to be disappointed in the lack of blood coming from Jayna’s Sagitarii or will ask for the blood of Nyssa and himself.

Back with Seg’s new captors, we learn that they worship the Ice Goddess, Cythonna, and were exiled for their beliefs. The Priestess questions Seg’s motives for being there and, on understanding that he saved Raika, offers him hospitality and the chance to heal his wounds.

Daron-Vex makes a visit to Kol-Da, who we learn did exactly as Daron asked in order to frame Lyta. There doesn’t seem to be any love for Mrs. Vex (and we haven’t seen her yet so I will reserve judgment as to her whereabouts) as the visit is for conjugal reasons. Lyta is still in her cell and is practicing her fight positions.

Jayna is still in her memories, of when her father made her and her brother fight their way through an Ice Storm to go to the base of a mountain to find oxygen. He leaves only one, causing her brother to hit her over the head and force Jayna to fight back and leave her brother for dead at the base of the mountain. Jayna’s father was one million times more tough on her as a child than she was on Lyta.  Nyssa interrupts her musings to ask if she has made a decision, citing sacrificing her daughter to retain her honor.  Jayna has had it beat into her whole life that duty to the state comes before duty to your family and we cut away to Seg before we get an answer. 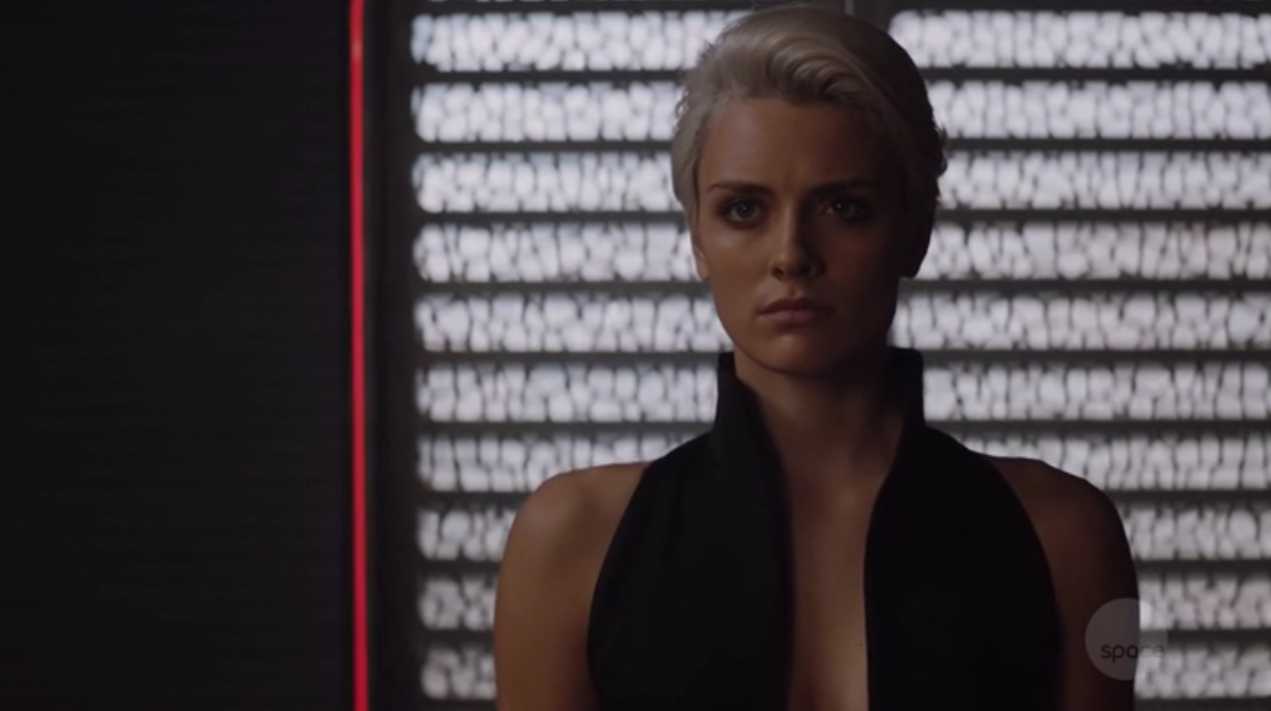 Is it really a Krypton recap if I don’t include a picture of Nyssa?

Seg is having his wounds tended to by Raika with some weird smelling blue goo.  Seg’s new captors are trying to figure out what to do with him. The House of El is the enemy of the exiles it seems. They have destroyed everything that they hold dear before, and they are worried that Seg will do it again. Raika refuses to tell Seg what his family has done, but it is in the distant past with the knowledge being passed down from generation to generation of Raika’s people of how to keep themselves safe from the El’s. Seg pretends that he isn’t the last El and tells Raika that his brothers, cousins, and uncles will come looking for him and destroy their hideout. Seeing this as a danger to their people, Raika gives Seg the respirator he asks for and shows him the way out back into the Outlands.

Back at the Lawmakers Guild, it’s time for Lyta to stand in front of her mother and the court stripped of her title and rank to receive her death sentence. Lyta stands strong with her face pointed forward while Nyssa implored Jayna to take a stand and join them to stop her murder.

In Jayna’s memories, we see the proud moment that her father passes on the necklace bearing the sigil of the House of Zod to Jayna,  which has been passed down from generation to generation. With the passing of this torch, Jayna is firmly a member of the House of Zod who kneels to no one.

Lyta turns to face her mother, giving the Zod salute and kneels to face her death. Jayna does not make a move, forcing Daron-Vex to stand up and condemn Kol-Da by explaining that she has recanted her statement and dropping all charges against Lyta, giving her back her status and rank like nothing ever happened. Jayna is waiting for her after the trial and explains that she owes nothing to Nyssa.  Lyta believes that if Nyssa is not to thank, then Jayna has done something to force the stay of execution. Jayna then pulls out the one line in the episode that broke my soul. 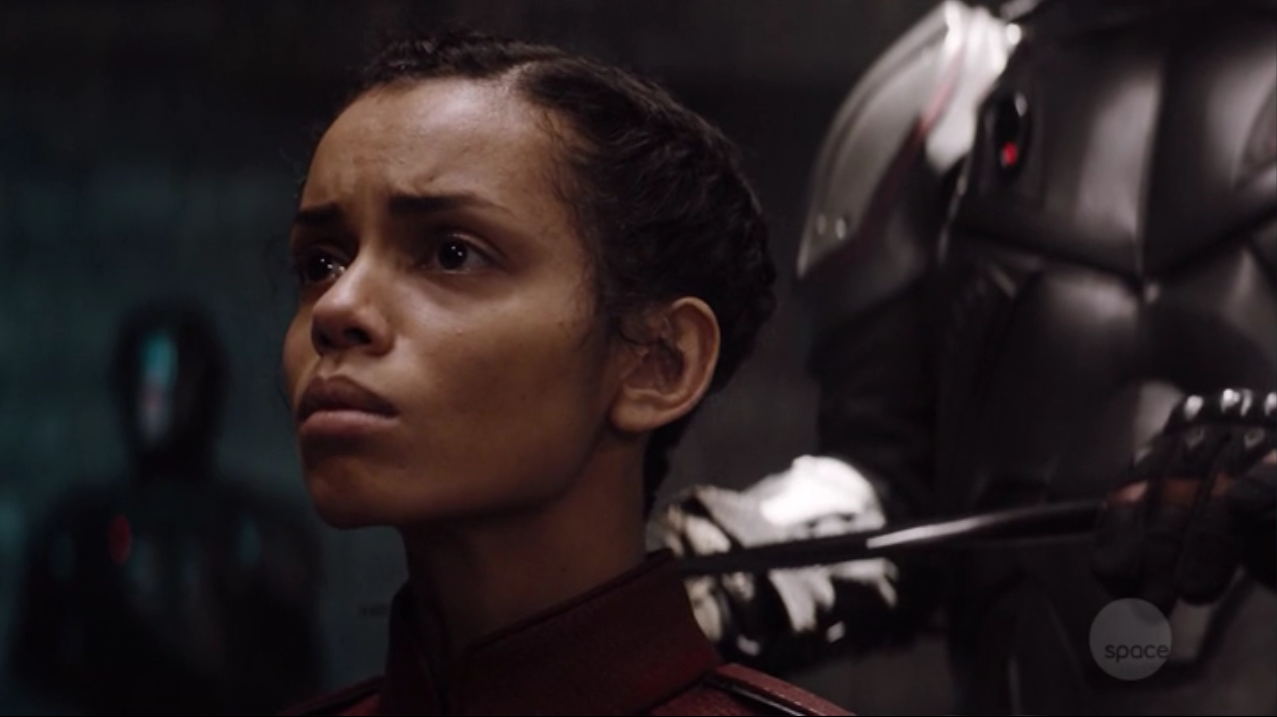 Lyta-Zod needs a hug and I volunteer as tribute!

I’m not entirely sure who she is speaking to with this line, whether it be about Lyta and the dishonor that she has brought on the house with this ‘episode’. It may even be that she believes that Seg is an operative for Black Zero and Lyta’s love for him has corrupted her making her an operative as well. Or it may even be that the shame is reflected inwards, in that she feels shame over placing her duty over Lyta, or even that she feels shame over that she was almost ready to join Nyssa and Daron in exchange for Lyta’s life. We never truly got an answer as to if she was joining the Vex’ in their vendetta, so she may be feeling shame over the fact that she has dishonored herself and her family name by going against her duty to the state and has placed her duty to Lyta in a higher position and joined them. I guess we have to wait to find out but I think that she is more ashamed over joining Nyssa and Daron as I have to believe that there is more than one maternal bone in Jayna-Zod’s body.

In Kol-Da’s cell, her barrier is removed and she is stabbed with the knife being placed in her hand, ending her storyline and leaving Lyta in the clear. Nyssa isn’t fooled and knows that her father cared for Kol-Da. Nyssa forced Daron’s hand and he had to sacrifice Kol-Da in order to save Lyta and keep their options open for having Jayna join their cause.

Seg is now running very low on oxygen in the Outlands and takes off his respirator. Finding a transmitter, Seg uses his science know how to try to repair his comms and is finally able to get in contact with Adam to let him know where he is.

I finally get some of the Nyssa and Lyta one on one screen time that I’ve been wanting to see ALL episode, as I was spoiled last week for it when Lyta summons Nyssa to ask what is going on with Jayna and ask where Seg is. Adam picks this as the perfect time to turn up and comes bearing a gift for Lyta- a message from Seg. Seg doesn’t think that he will survive and talks about Lyta’s strength and bravery, and talks of their first kiss saying that Lyta is everything good in him, proclaiming his love before it cuts off. Lyta is spurred into action by this and I get the first inkling that maybe we have an LGBT character in this show after all when Adam stares at the naked form of one of the male Sagitarii as he leaves the room. Lyta commands her one of her troops to get ready for a classified op in the Outlands.

If I just lay here, would you lie with me and just forget the world?

Seg is lying slipping in and out of unconsciousness in the snow when a Lyta appears to him in the light. It is not, however, Lyta, and he has been taken again by Black Zero. In the warmth of the tunnels, Seg is brought back around and is questioned over where he took Raika. Turns out she plays a larger role in all of this and is the key to stopping Brainiac! Seg refuses and is saved by Lyta and rewards Seg for staying alive with a kiss before scoping the place out. Lyta, alone in the tunnels, is caught off guard by the Commander who isn’t all that he seems either. After a quick fight where the Commander the upper hand on Lyta, it is revealed that he has the same necklace bearing the sigil of the House of Zod that she does and that she passed it down to him, making the Commander her son!

And that’s it for the first half of the season. No breaks for us though because it’s a Syfy show, we power on like women! Next up is episode 6: Civil Wars