Welcome to yet another FanFic Round-Up! We are going to shake things up for this month and focus on a singular fandom: Wynonna Earp! (What’s that? No SuperCorp this month? I think we’ll all survive!) If you have been on Twitter the last week or so, you have probably had the tag #FightForWynonna permanently burned into your eyeballs. I sure have! I’ve been posting with every spare second I have to help save the show after IDW ran into financial difficulties and we learned that production had been delayed with no start date in sight. I figured why not help to raise the profile of this amazing show and of its fans with a fanfic round-up dedicated to some of its talented writers! After all, without this show we probably wouldn’t have these fics in the first place. 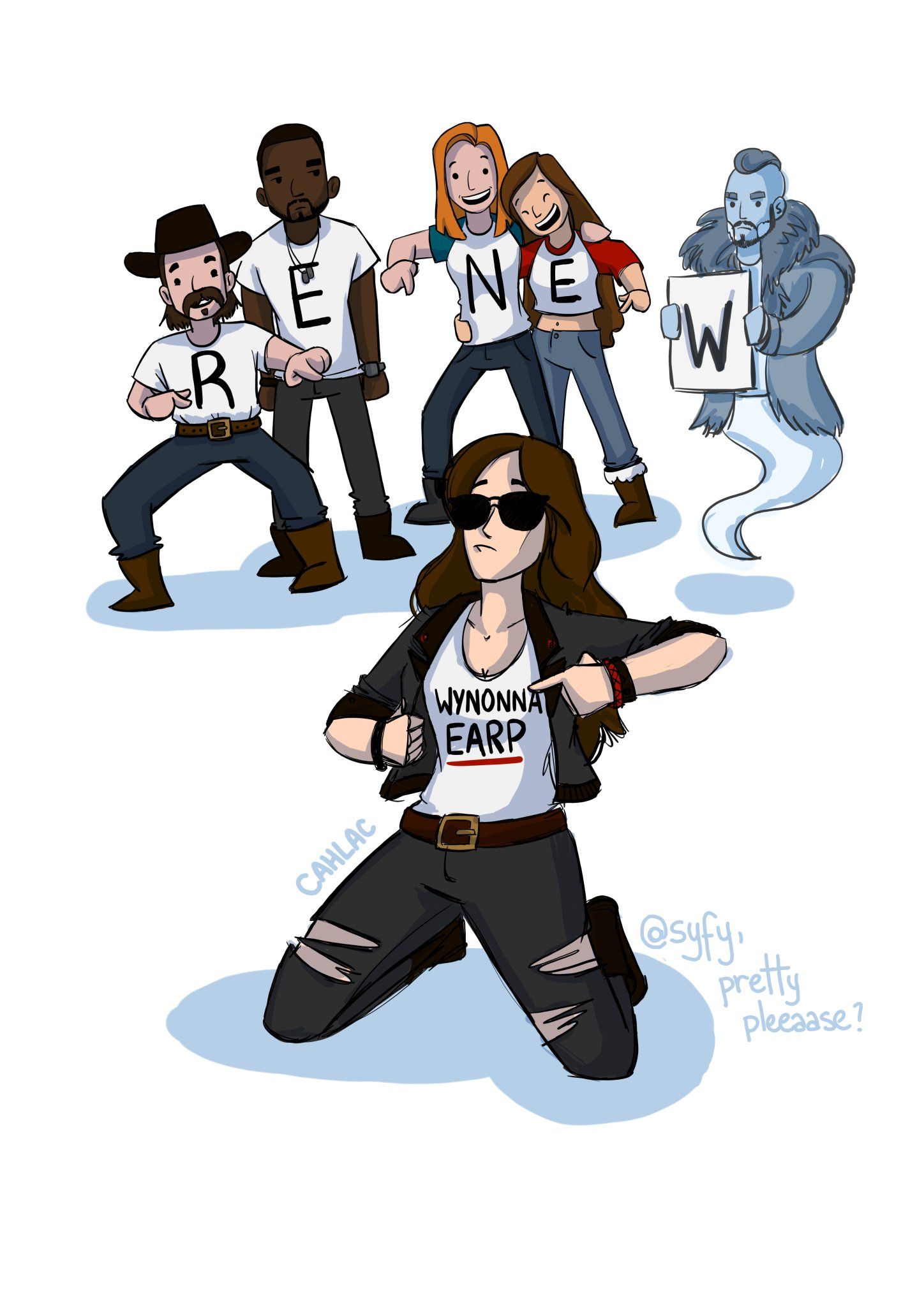 Art by cahlac and is available to buy here

First up is Scars of Sweet Paradise by wrackwonder. This is wrackwonder’s latest fic out of a catalogue of 22 fics within the Wynonna Earp fandom. Here is what you can expect from this fic:

Finding Waverly is only the beginning when there is so much unsaid and so much that needs to be said. A post season 3 fic.

With 10 chapters, over 47k words and 11854 hits at the time of writing this, this is surely a fan favourite! (It doesn’t hurt that it features WayHaught) 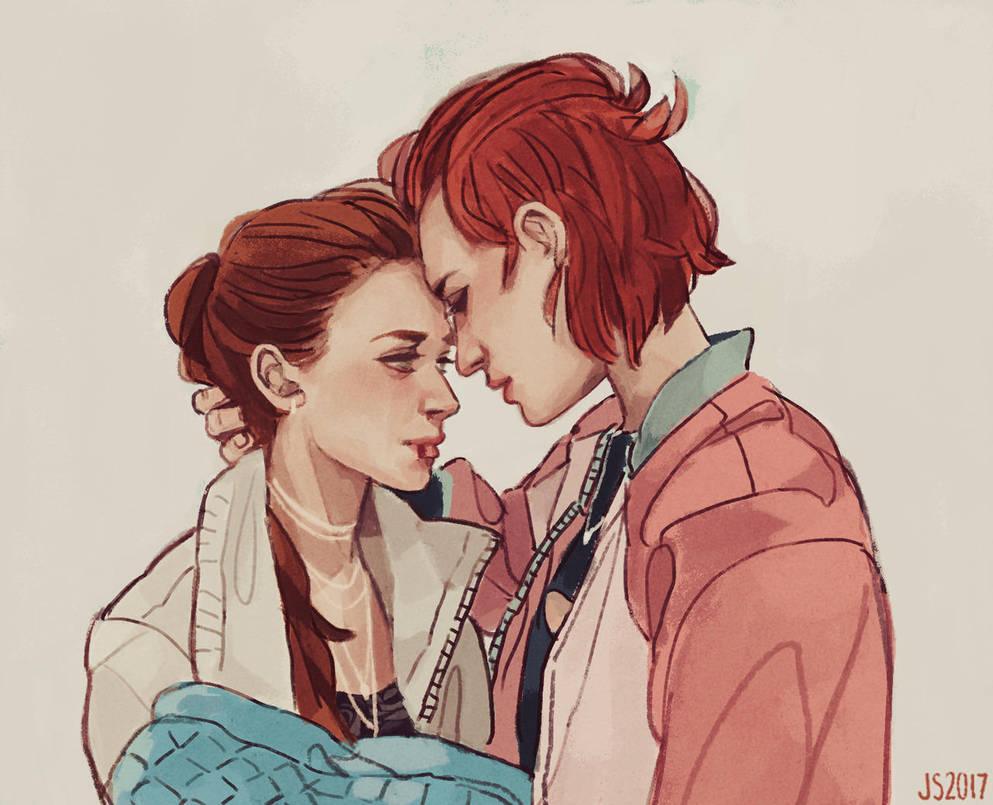 Art by spicyroll and can be viewed here.

Next up, I thought we’d focus on another fan-favourite author (and one I had the chance to meet last year at ClexaCon) BaggerHeda!

BaggerHeda has written a total of 27 fics in the Wynonna Earp Universe, and when I asked her what fics she would like me to feature, she kindly responded with the following two.

First up, we have Out Of The Wild Blue. The summary reads:

Nicole smiled. It was a lovely, slow smile with more than a tinge of heat to it. “Are you asking me out on a coffee date, Waverly?” she said, laughter delicately lacing her words. Dolls eyed the two of them and started to smirk, hiding his small grin behind his cup. Waverly felt her ears burning, heated with embarrassment, and what the hell. It wasn’t like she was a stranger to people flirting with her, she would usually handle it like a pro, but something about Nicole and that million-dollar smile was putting her brain in neutral, rendering her incapable of coherent thought.

Waverly blurted out, “Maybe you should try asking me when we’re not mid-route,” as she quickly backed out of the cockpit, trying not to listen to the low chuckled laughter as she left. She stood motionless in the galley for a full fifteen seconds, wondering what had happened. Oh, I just got myself in trouble, didn’t I.

And she couldn’t deny that part of her was really, really hoping that yes, she did.

Waverly Earp loves her job as a flight attendant. Then, one day, she meets a tall redhead who sparks her interest a lot more than she was expecting.

This fic is seven chapters long with a total of 23,959 words to its name and classes as an AU fic. With over 13k hits, it sure is a favourite!

The second one we are highlighting comes with an NSFW warning, so don’t let your boss catch you reading it (or your mother!) Willing To Wait is the second part of the Curious, Patient series.

She hadn’t expected much of anything when she first came to Purgatory. A fresh start, maybe. A chance to rebuild something for herself after the threads of her life had unraveled and frayed apart: her family, then a quickly failed marriage. So like countless others before her, she’d sought solace in horizons where the faces were unfamiliar. Just as she’d thrown herself into her studies and earned top marks for her single-mindedness, she’d throw herself into a new life in this sleepy town. Hit the reset button and, as was her way, set about to remake herself with patience and care, bit by bit.

She certainly hadn’t expected bold, brilliant Waverly Earp. Waverly, with a sunshine smile, the sweetest thing she had seen. Waverly, the woman who’d captured her heart in no time at all, and made her ache with a longing she’d never imagined before now.

Even so, Nicole knew how to be patient.

This fic has over 7k words over its one chapter and has been uploaded since October 2018. If you tend to read NSFW fics, then this one is for you!

For the next fic, we have a fan submission and it takes us back to the feels we all felt during the San Junipero episode of Black Mirror! my love, heaven’s not too far to touch by maidenstar. Submitted by @for_wynonna  on Twitter, this fic has made its way quickly onto my ‘To Read List’.

It is always a bustling Saturday night in the strange and ethereally charming city of San Junipero. Beautiful young things come here to party their troubles away for one night a week, but for Waverly Earp being new in town is overwhelming. This is a place for ghosts; a city where everyone is dead or dying. Everyone, that is, except her.

Waverly does not know a single other soul in the city, and on that very first night she feels lost amongst the hubbub. After years of lonely hospital bedrooms she is desperate for the chance to leave her body behind and enter a hedonistic world of virtual reality. She just needs someone who might show her the ropes, who might remind her how it feels to really be alive.

That is when an enigmatic, red-haired woman walks right into Waverly’s (after)life…

With 13 works within the Wynonna Earp fandom, and 34 overall, this fic quickly made its way into the hearts of its readers. Marked as ‘Complete’, it has 14 chapters and almost 9k hits!

Last up for this month, we have yet another fan submission, this time submitted by @nickysaintnom on Twitter. This time it is a series submission containing 39 different one shots! you can tell everybody this is your song by gilligankane and TheGaySmurf has been in the making since 30th of August in 2017 and has finally been marked as complete this month on February 15 2019!

A series of oneshots that take place in the 80’s WayHaught Mixtape universe. Where they fit in the timeline will be explained in the Author’s Note for each chapter, but they will not be posted in chronological order. Some are before the canon of ‘it’s like i wrote every note with my own fingers,’ and others are from their future.

This series has over 600k words and is not an undertaking to be taken lightly, but I have seen people talk about this one all over Twitter. Part one itself has over 38000 hits alone! What is even better is that the authors have supplied the reader with Spotify playlists curated to be listened along with the fics themselves. I do love it when you can hear the inspiration behind each one along with the fic itself (especially as I used to write songfics back in the day and have written one-shots inspired by songs!)

Ok, I think 5 fics for this month, highlighting four different fan favourite authors is more than enough for us to be reading in the coming month. I hope, that in some small way, this little round-up manages to be seen by some people in charge of the production at IDW, and if not, then it is giving you fans some more fics to read while we wait!  Remember to include #WynonnaEarp and #FightForWynonna in your tweets, tweet hard and hopefully, the cast and crew will be back to work soon enough! As always, if you have any recommendations for fics to include next month, drop us a line on Twitter to do so.