It has been A SEASON! There are so many standout moments from this one, but I have the ‘fortune’ of narrowing it down to just 10. So shall we begin? 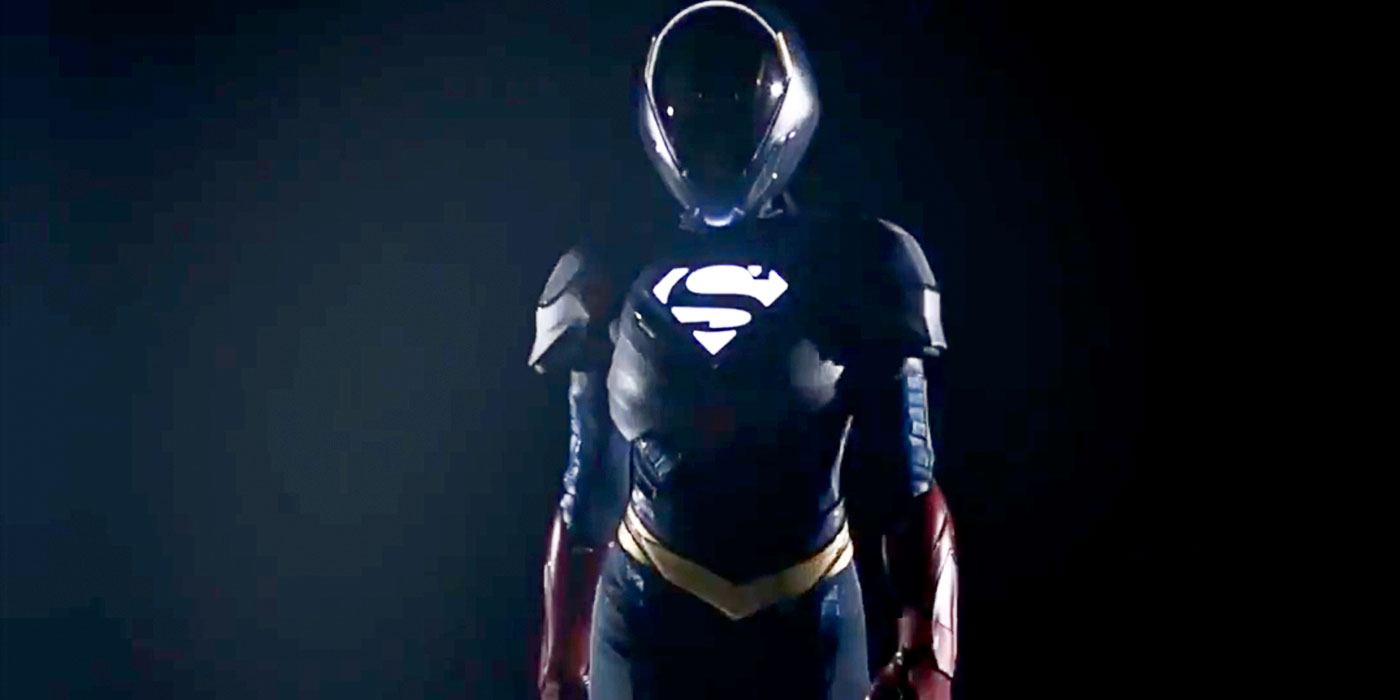 I was SUPER excited about this suit when it was first shown in the Season Four trailer. After it was shown in the show I really didn’t know what to think. I thought it was going to be a gimmick and would be used for one episode only. It was actually a really smart way to have Supergirl in that episode as Melissa Benoist was finishing her role on Broadway as Carole King. I loved the fact that it was designed by Lena, clearly after the conversations at the end of Season 3 when it was revealed that Lena had crafted Kryptonite, and she just happened to have it when Supergirl needed it most. Then it was brought back again throughout the series and it made me love it even more! 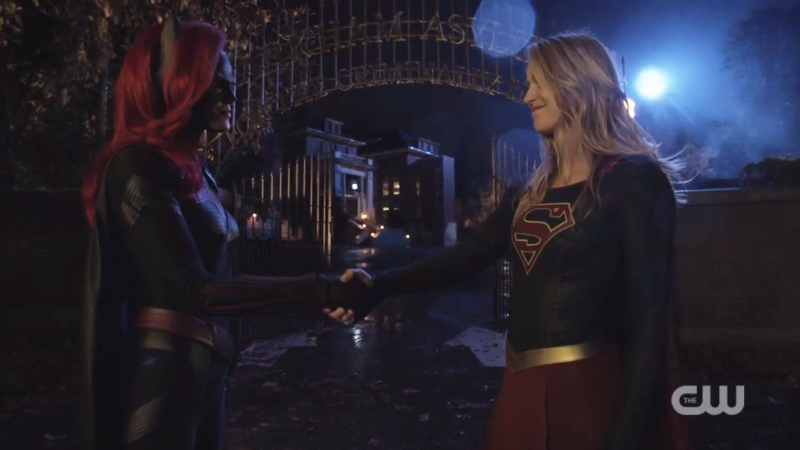 It’s not Batwoman’s fight, and she’s risking everything to throw her hand in with us. Everything. Maybe I do know what a hero looks like, after all. And she wears red and black. —Batgirl

Is anyone else excited for Crisis on Infinite Earths and Batwoman in the Fall? I sure am! It was great to see Kara interact with another female superhero in this crossover seeing as the Legends were being left out of it. Even more exciting was the flirting that the two engaged in (x-ray visioning Kate Kane’s tattoos anyone?) Kate Kane is one of my favourite comic book heroes and I cannot wait to see what appears to be the Greg Rucka and J.H.Williams III version of Kate Kane come to life!

I guess that Sudafed wasn’t strong enough. Must add Super Strength to my shopping list!

Is there anything funnier than seeing a superhero trapped in a situation where she and the people she is with are in danger, but she cannot be her superhero self because she isn’t out as said superhero to the group? This entire episode was hilarious! From the earplugs to asking if there is a closet she can hide in, Melissa Benoist, Katie McGrath and Andrea Brooks playoff against each other in a comic situation in some of my favourite scenes of the season!

This scene is both heartbreaking and hilarious. Heartbreaking because Lena is teaching Brainy how to bottle up his emotions (with lines he repeats all season). Hilarious because of the way it is said. Lena is angry, frustrated and generally upset because one, someone stole her tech. Two, because someone used this tech to irradiate the atmosphere with Kryptonite, making it deadly to Supergirl when the two of them had just started to repair their relationship. I could listen to this scene on repeat. Hell, I just want a soundbite of Katie McGrath saying boxes so I can make it my alarm tone! 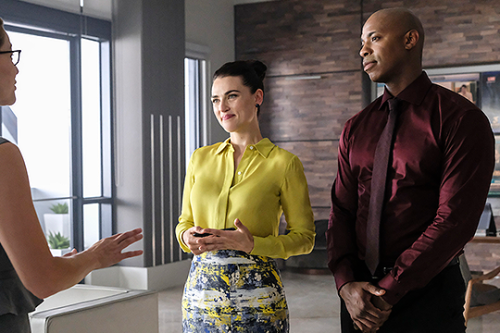 I had to make sure that my Lames picture included Kara.

So I hated Lames from the beginning. They were thrown upon each other in Season Three’s Christmas episode and the only reason I can think of for why this happened between the two is that Lena found Alex’ stash of alcohol at the party and drank all of it, lowering her inhibitions and then all of her friends shouted ‘CHEMISTRY’ and pushed Lena and James together. Lena didn’t need a man, she’s said before shes never stood behind a man. I was so happy when this breakup happened. Lena was being the best supportive girlfriend she could be, by getting the charges against James dropped and trying to cure cancer in the meantime (which she actually did, despite the consequences). James became annoyed and bratty about these, culminating in Lena tossing him out of her Rolls Royce being driven by her chauffeur to the airport to fly in her private jet on a spontaneous trip to Paris for Valentines Day. If someone was doing all of that for me, I’d damn well let them use me for the human trials if they asked! 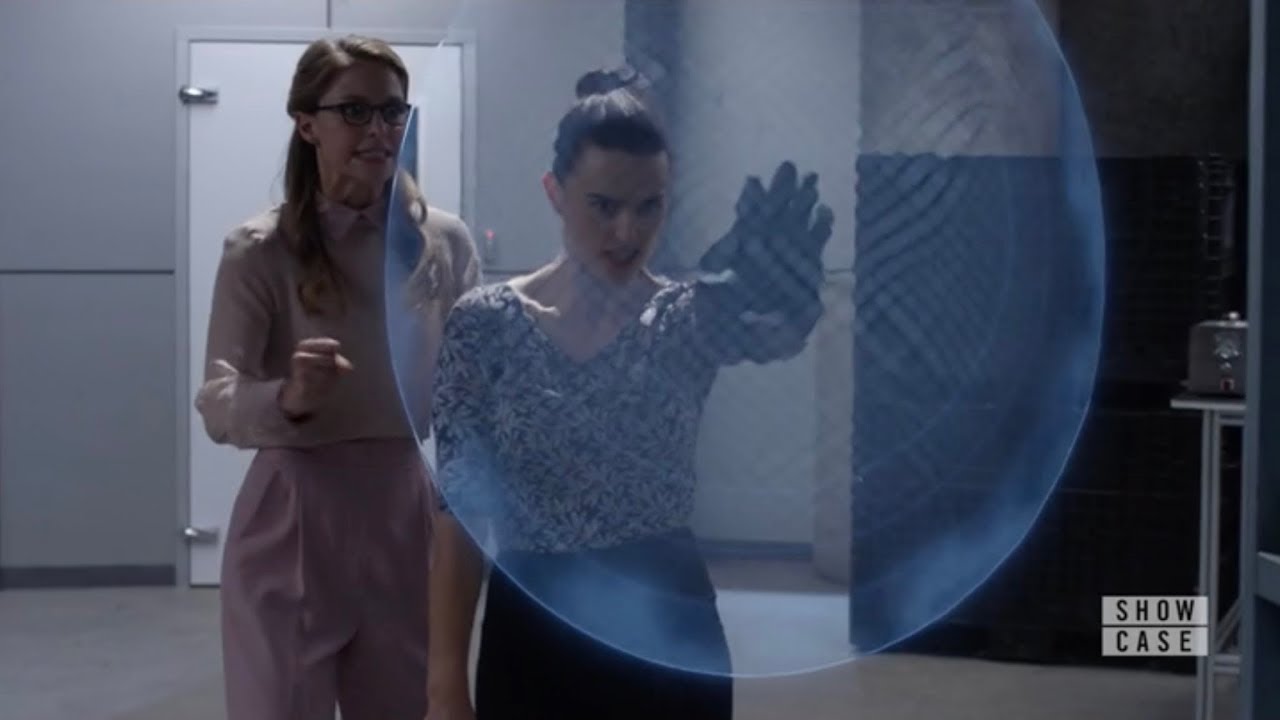 The first rule of Lena Luthor Fight Club: Must kill ALL the gays!

Lena Luthor fighting is one of the best things I’ve ever seen! From her using the shield to protect Kara to her whipping out a baton from the heel of her boot in her own private self-piloting jet, Lena has been the definition of BAMF this season! There is more which solidifies her as a BAMF, but showing that she is both brains and brawn this season shows more than ever that Lena Luthor is a Superhero in her own right! I say she, along with Alex, should be given their own hero names.

4. Alex and Kelly sitting in a tree… 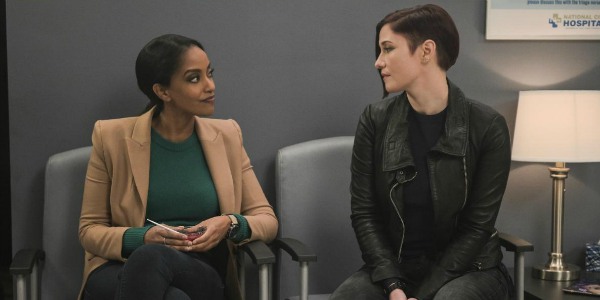 ALL OF THE DANSEN LOVE! I WILL GO DOWN WITH THIS SHIP! (I still love Sanvers as well though so don’t shoot me! Alex deserves to be happy!)

Alex has had a rough time of it the past two seasons. She broke up with the love of her life, Maggie Sawyer, in season 3 episode 5 (still the best episode of that season for me for their acting alone) and she has been ‘alone’ ever since. Sure, we are told that Alex has been dating, like A LOT, and we even have a run in with one of these dates, but nothing really stuck for Alex. That is until Kelly Olsen. Season 4 episode 15 saw sparks fly between the pair over hospital Jell-O. Alex was there for Kelly when she needed it most, and vice versa. Kelly was in the hotel room with Alex when she got the devastating news that her adoption fell through at the last minute. They darted around the subject, but we as viewers felt the sparks fly from the first time Azie Tesfai came on to our screen. I cannot wait to see what season five brings for the pair!

‘Dear Diary. For years I’ve dreamed of killing my brother. Today I finally did it…’ How I imagine this diary entry beginning

Ok, I HATE Lex Luthor. Every single portrayal of him in film and TV has been lacklustre, until now. I, surprising everyone, actually enjoyed Jon Cryer as Lex Luthor. He had just the right amount of charisma for the role and didn’t turn out like a weird version of Mark Zuckerberg. He had just the right amount of evil without being a caricature. When Lena shot Lex in the last few minutes of Season 4 I did a fist pump. This is the man who ordered multiple hits on Lena. This is the man who kidnapped her and forced her to watch as he destroyed her city. This is the man who forced her to become CEO of a company where he had completely decimated and tarnished the reputation of its name. He tricked her at every turn, emotionally abused her and completely forced her into doing his bidding. I will not be sad to see the back of Lex. I’m just sorry that Lex had to take away one of the only people that Lena cared about in the process. 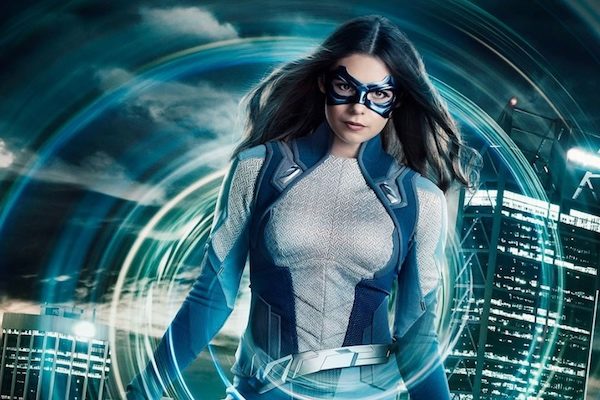 Back in July, during SDCC, I was manning the FangirlDen twitter and trying to cover everything that came out of the panels. One name was dropped throughout the Saturday in relation to the casting of Nia Nal. I took it with a grain of salt but became more and more excited as the day went on and it was confirmed. I was so excited when it was announced that a real-life superhero was playing such a historic role! Since Nicole Maines has taken up the role, I have made it my mission to learn as much about her as I could (in a non-creepy way of course!) I’ve read ‘Becoming Nicole’. I’ve watched her Ted Talk. I’ve watched and read various interviews. I am not trans myself, but I am so happy that a lot of my friends finally have a superhero which reflects them and their journey. More importantly, I am beyond words at the fact that the writers included Nicole in the writing process for her character and in her coming out. I cannot express my feelings over this casting (and I’ve had 10 months now). I don’t think I ever will.

1. Lena Luthor finds the best tailor in all of National City. 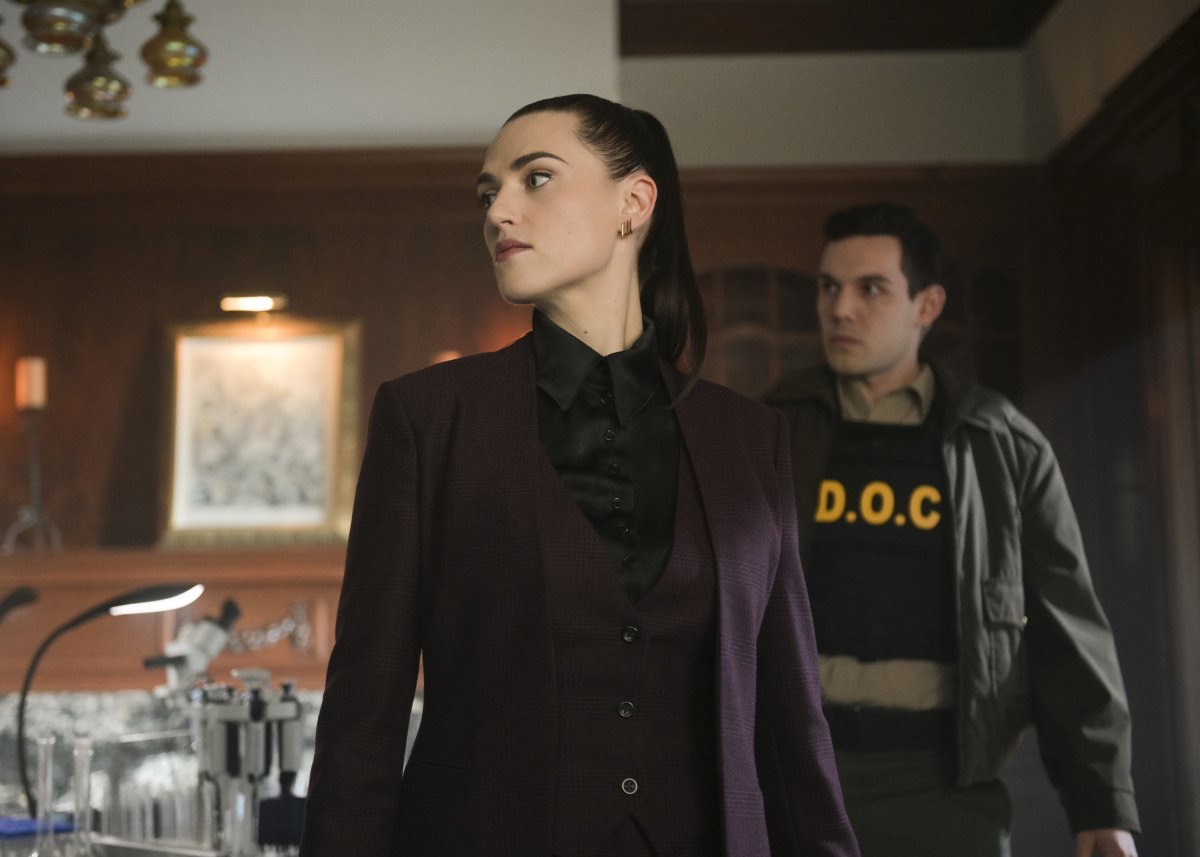 THANK RAO FOR KATIE MCGRATH LOOKING THROUGH THE INTERNET AND SEEING CATE BLANCHETTE IN A SUIT AND ASKING THE WARDROBE DEPARTMENT TO PUT LENA IN SUITS!

If there is one thing Katie McGrath can do well, then it is in her ability to kill the gays. Seriously though! For the entire back half of this season, pretty much since the Lames breakup, Lena has been wearing suits almost exclusively, starting with the one above! Twitter broke! I broke! I think there were tears involved. I cannot thank Katie McGrath enough for asking the wardrobe department to put her in suits! It completely matches the character of Lena (and may or may not have spawned fanfic by yours truly which involves Lena and a suit from another show). This has truly been a blessing from Lesbian Jesus herself! May I also add that I really need the name of Lena’s tailor because these suits are to die for and I must have one!

I’ve been joking all season long that Sundays at 8pm has been my time to watch the ‘Lena Luthor Show’, but I think you can all understand why by looking at his Top 10. Lena is undoubtedly one of my favourite characters. All of the female characters are to be fair. I know there are only a couple of Kara/Supergirl specific top moments here, but there are simply too many to choose from. I had to narrow it down a little. Kara has so many one-liners which are just perfect, that I feel like I should make a post dedicated to those, but for standout moments, when I think of everything which has happened this season, these are the ones which come to mind first of all.

And now our long hiatus begins, but join me in July for my SDCC coverage. I am excited to see what Season 5 and Crisis on Infinite Earth brings!