Hello again! It’s been a while since we had an interview on here, so I figured I’d treat you all by lining up an interview with two of your Embedded Podcast Correspondents, Angie and Belinda from StyriaTypical! I met these two wonderful humans at ClexaCon 2019 and they are every single bit as awesome as you imagine that they would be based on their podcast.

StyriaTypical, as it says on the header image, is the podcast you can sink your teeth into. It is a recapping of the hit web series turned movie turned Primetime TV show in development Carmilla. To date, at the publication of this article, they have recapped as far as season 3, and have been around since August 2018. They even held their own panel at ClexaCon for a ‘Choose Your Own Gayventure’ and have interviewed Kaitlyn Alexander, portrayer of LaFontaine, Kim Turrisi, author of the newly released Carmilla book, and have even posted an article with fans views around the representation of non-binary/gender queer characters in the series. I am so excited to bring this interview to you all (and I’m sure Belinda and Angie are as well!)

Christine: How did you both discover Carmilla?

Belinda: I had seen gifs of Carmilla on Tumblr (specifically the one of Carmilla punching Will) and decided I needed to check out the show. I binged the first 20 episodes during the break in season 1 and was instantly hooked.

Angie: I saw gifs on Tumblr first, but I avoided it because I wasn’t interested in a story about a vampire. And Belinda loved it, so I wanted to surprise her with a Hollstein fic for her birthday, and in the writing process it occurred to me that I might actually have to watch it to write about it, and when I actually gave it a real shot, I was hooked.

Christine: Why did you decide to start StyriaTypical?

B: I wanted to listen to a podcast about Carmilla and when I couldn’t find one to listen to, I became determined to start one. I got the push to bring my podcast idea up to Angie at ClexaCon in 2018.

A: Because it was something Belinda wanted to do. LOL. We had attempted a podcast years before but we had too much going on in our lives to see it through. 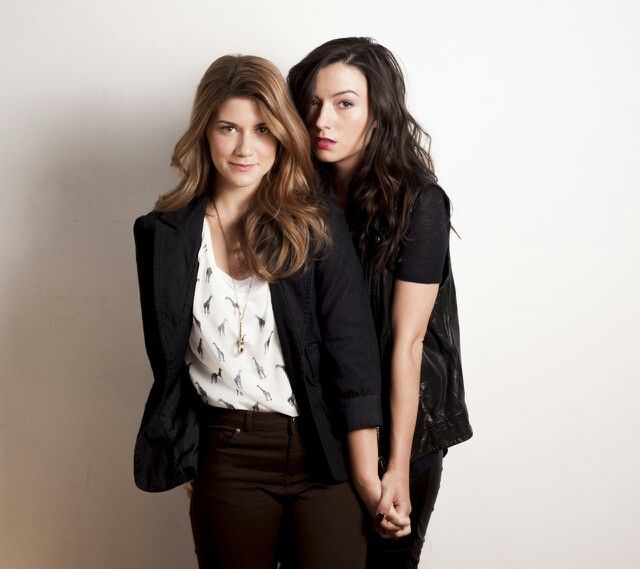 Christine: What are some of your favourite things about this fandom?

A: I’ve always felt like I was on the fringes of this fandom, but I never felt that way when I interacted with other fans. Everyone I’ve met has been really open and friendly.

B: For the most part, everyone I’ve interacted with has been friendly and welcoming. There is something really special about spending time with people who are passionate and love the same thing you do. Getting to meet other Creampuffs at different events is always so much fun.

Christine: What are some of your favourite episodes of the podcast that you would describe as ‘Must-Listen-To’ episodes?

B: I think any of our season recaps with Karly are good episodes to listen to. As well as the interviews we’ve been lucky enough to conduct with Kaitlyn Alexander, Kim Turrisi and two of the organizers of CarmillaCon. I feel we hit our stride a few episodes into the podcast, so please don’t judge us too harshly by our early episodes!

Christine: What are your plans for the podcast when you run out of episodes to recap?

B: I’m not sure and I’m in a bit of denial that we’re going to run out of content. Not-so-secretly, I’m hoping that we get new Carmilla content to podcast about and then we don’t have to worry about running out of episodes.

A: Would anyone listen to us podcast about our dog?

C: I would for sure!

Christine: What are some of your favourite interactions either with cast or fans?

A: Not an interaction, per se, but I’ll never forget the time Natasha Negovanlis sat next to Belinda in a movie theatre. We had taken our seats and I turned around and Natasha was walking over and I told Belinda, who hadn’t yet sat down. “Don’t look, but Natasha Negovanlis is right behind you.” We didn’t speak to her that night though. LOL.

B: That was a good night. LOL.

I’ve been lucky to meet the cast at different events – they all do a good job of making this nervous fangirl as comfortable as possible. The one thing I appreciate about meeting other fans is I don’t feel judged for being a more mature member of the fandom. 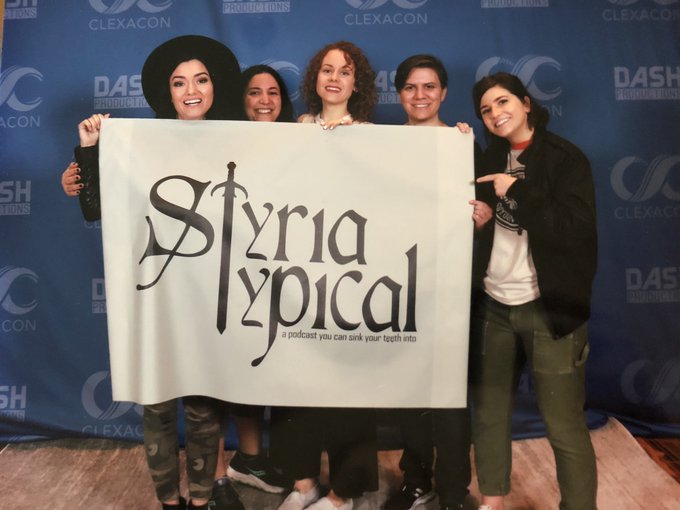 Belinda and Angie with Natasha Negovanlis, Elise Bauman and Annie Briggs at ClexaCon 2019.

Christine: And now I have some quick-fire lightning round questions, so say the first thing that pops into your mind.

Who is your favourite villain?

A: Mattie. Of course.

A: Summers – they have Mel and don’t have Theo.

There are several different ways in which you can check Bangie out. Try their Website, Twitter or even listen on Spotify (or any other podcast service). I’ve had a lot of fun with this one, and it has been some time in the making so I got even more excited when we were able to piece all of this together. Anyway, until next time Creampuffs!