We’re back Witches! Yes, it has been a while since we posted any recaps (things went weird with several moves including intercontinental moves) but I was hooked on Motherland: Fort Salem from the second I started seeing posts about it on Social Media. I’ve been a HUGE fan of TV shows about witches ever since I first saw “Charmed” when I was maybe 9 or 10, and I watch every single one that I can, and if you have read any other articles that I have published, then you know that I am a sucker for revisionist history. Let’s jump right in with Episode One: ‘Say The Words’

We open in a mall on Conscription Day with a blue balloon floating down which then pops and it becomes a scene out of a horror movie. Everyone stops what they are doing and starts throwing themselves off of the railings on the top floor. The woman who caused the balloon to pop then sets her freaking face on fire with the car’s cigarette lighter and drives off into the snow leaving death and destruction in her wake.

After a really cool opening credits scene showing women in classic paintings taking the place of the men you have always seen in them, we are introduced to Raelle Collar (played by Taylor Hickson) from Chippewa Cession. It turns out Raelle is a BAMF and is healing those in her community by moving their ailments from their bodies to her own.

This hairstyle is definitely witchcraft!

We move quickly onto New York where we first meet Abigail Bellweather (Ashley Nicole Williams) and then onto a Matrifocal Allotment (sorry this means no guys allowed!) and we meet Tally Craven (Jessica Sutton). Tally’s mother is dead set against her daughter joining the Witch Army as she has already lost so much. Abigail, as it turns out, is facing pressure from her family to make it all the way through to War College to bring honour to her family. As with all of our leads, Raelle is counting down the minutes until she can say the words of conscription. Her father waits it out with her, passing on a charm to her which has been passed down from generation to generation to keep her safe during the war.

Conscription comes for then all in the form of a medal sparking and floating in the air in front of them which then, it seems, turns into their passes to get preferential treatment at airports with people giving up their seats and getting an escort through to the plane.

Fort Salem beckons with an opening assembly where stomping your feet is an acceptable substitution for hand clapping and cheering when General Sarah Alder (Lyne Renee)takes to the stage to welcome all of our new witches to the fort. 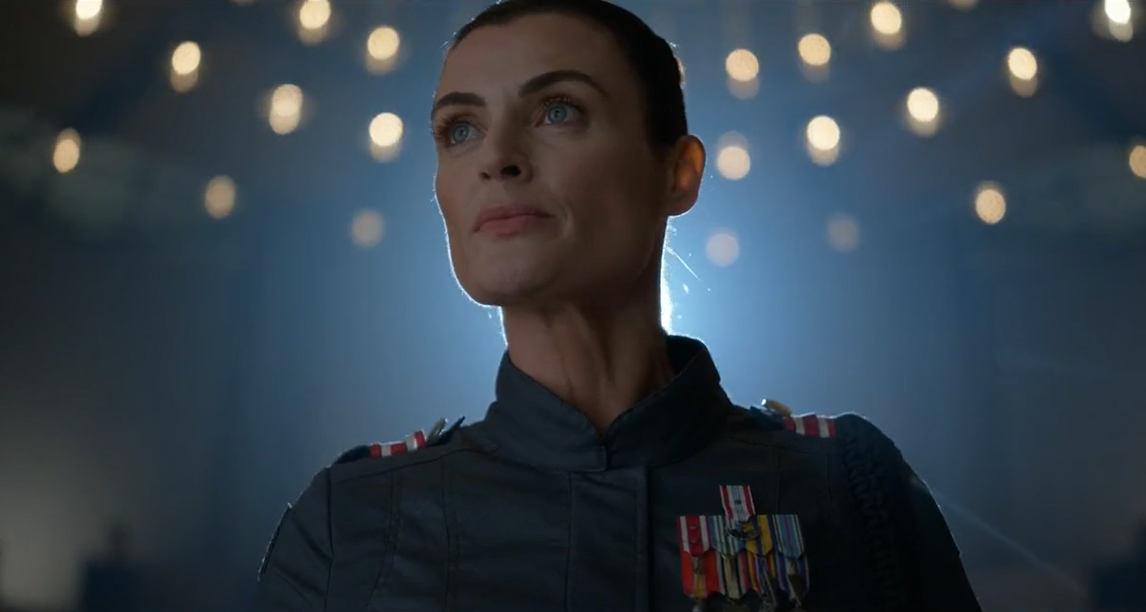 You look FANTASTIC for being over 300 years old Ma’am!

There is an entire auditorium filled with fledgeling witches eager to start their basic training, all except Raelle who is the only one who is not stomping her feet. A quick blessing later consisting of ‘A blessing on all of you, a blessing on this place. This Witches place’, our three witches are headed off to their barracks to learn that yes, they are all rooming together. Each room only has three witches in it. I guess this is a little nod to the Rule of Three in Wicca. Yes, I did my research! With this rule, the energy a person puts out into the world will be returned to them threefold. That and the ‘Charmed Ones’ coven (whether you look at the Original series of Charmed or the new one) has three witches in it and is symbolised by the Triquetra.

They all decide to share their backgrounds with us around a candle. Tally’s aunt died in combat and she was given a ticket out of the Army, which she decided not to take. Abigail it seems has lost pretty much every female in her family up until this point. A blue rose is then set completely on fire by Raelle and we learn that her mother was killed in combat the previous year, encapsulated in glass after she was caught in a firestorm on a beach. The witches then join hands and speak a prayer for the ones they have lost. I’m not sure if this is a ‘night before basic training’ ritual which all of the witches go through, or if this little ‘coven’ has taken it upon themselves, but it is a cool way to get some exposition which is vital for this episode out of the way. 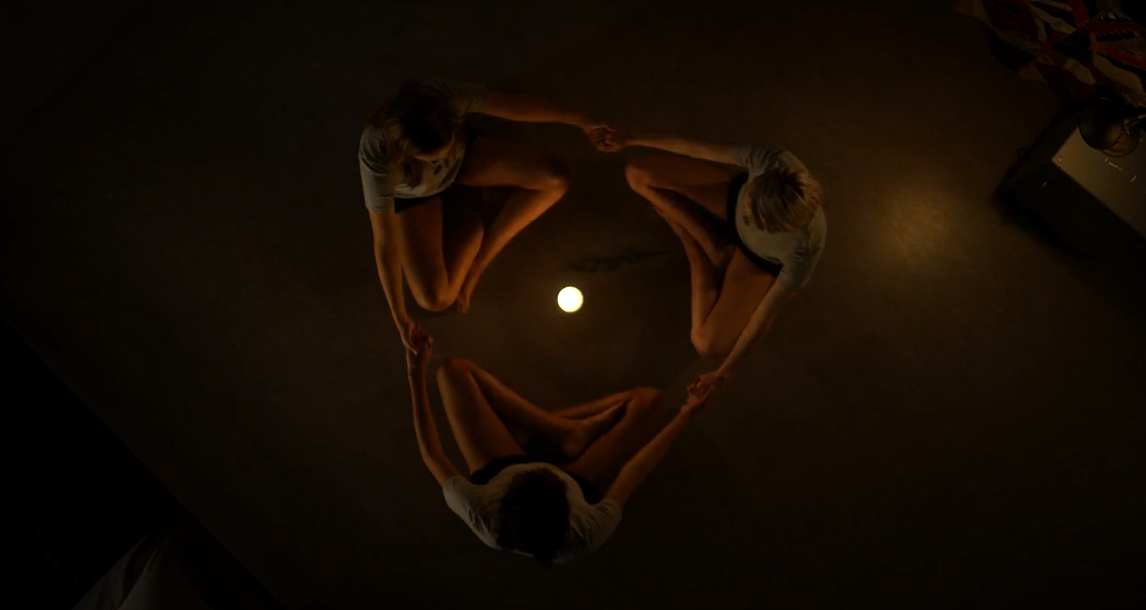 Well if this isn’t the cutest little coven that I ever did see!

It appears that a lot of witchcraft at Fort Salem revolves around singing (which means that I would probably fail out on my first day) but Raelle has decided that she is having a ‘bad voice day’ and nopes it out of there to go find the witches that are making tornados instead because that is so much cooler than making water rise out of a pensive like cauldron.  Of course, this gets Raelle and her new Witchy friend, Scylla, demerits, puts Raelle in her Drill Sergeants bad books and earns herself a stern talking to about how she is going to end up being shipped off to the front lines early. Their covens are apparently scored against each other and Raelle’s little stunt has put them down in the rankings. We finally get a look at Raelles power outside of healing the sick after she loses her temper at Abigail and her voice goes all screech like but they are cut short after the Spree claims responsibility for their second attack of the episode.

Do you like training montages? Because I do when they involve witch martial arts, carrying cabers in the rain and mud, combat obstacle courses and lectures. It looks like maybe our coven is bonding after training one day, but then Scylla interrupts and drags Raelle away to tie ribbons on their feet while doing Salva aka witch drugs that make them fly.  It earns her a nice all-expenses-paid trip to the infirmary.

This is the last straw for Abigail who goes directly to General Alder to request for a transfer but is shot down before she even takes flight. Alder sees exactly who Raelle is before she or anyone else in her unit does. Raelle is, however, still in the infirmary and is reading letters her mom had sent her before her death and learns that Abigail’s mother is the reason for her mother’s death. The two decide to take it out on each other in the witch martial arts class and we see more of the screechy witch voices and a huge display of power with some indoor thunderstorms. The little coven is now slowly starting to fall apart before they’ve even really begun.

The chemistry between Raelle and Scylla is going from strength to strength however, as Scylla claims she has a way out for Raelle, or rather a way in (if you catch my drift). I don’t know what the rules are for fraternising with other witches, but it is clear that Raelle is still looking for any way out, and that seems to be through Scylla who asks her to let the witches train her to get more powerful.

With a new ferocity for training, the witches come together for a new singing class. Raelle is reticent at first but then takes her place with the coven, making their rod turn red hot and make a really weird shaped piece of magic appear above it. It continues to grow and grow until the elders force them to stop, fearful of what the coven can do together. Abigail and Raelle start to patch things up for the good of the coven, but Raelle makes it very clear that they will never be friends.

I just chant get enough!

Enter the Spree agent that we saw at the beginning of the episode, you know, the one who decided it was a good idea to burn off her face with the lighter? This time she is in Fort Salem, and she sees a blue balloon in the mirror instead of herself. After a coin falls down she decides it is yet again a good time to burn off her face. The face melts away to reveal Scylla who opens the door to spend the night with Raelle.

This episode has given me a lot of questions, like how did Sarah Alder manage to live so long? Is this just a witch thing? Does the burning of the face hurt the Spree? Was Raelle’s mother actually wearing the charm when she died? I guess all of these questions will be answered in the weeks to come. The next episode airs March 20 2020  at 9 pm/8c on Freeform, and is titled “My Witches” and I really cannot wait to see more of MY witches!