And that is a very brief recap of the first episode, now on to Episode 3 ‘A Biddy’s Life’.

We start in the Biddy’s Barracks where one of them doesn’t look too hot, looking at a picture of her younger self before they all have an actual conversation with each other. I think this is the first time we’ve heard them speak! Anyway, Alder leads them all out to some busses which are just arriving and the entirety of Fort Salem has decided to put on a display of force for their new visitors. The visitors? Well, it is the male witches who have all arrived for Beltane!

Tally is me at every single convention that I go to.

Today’s training involves identifying flags around the room using scrying. Tally is the only one who can master it, however, siphoning off the energy surrounding Beltane to see the colours. What is Beltane you ask? Let us take a little detour into some quick research I’ve put together for you.

Beltane is another name for the May Day festival and comes from Gaelic (that’s why we have two May bank holidays in Scotland FYI). It is one of the four Gaelic seasons, the more popularly known one is Samhain  (aka Halloween), and rituals involving fire are used to protect the community and to have a bountiful harvest. People would pledge themselves to each other around the fire and the smoke was said to bring fertility and protection. It is also when a lot of Handfasting ceremonies take place. I see where the show is going with this! anyway enough with my bad research skills.

Before we get to see out little witches interact with the males for the first time this season, we cut to the scene of the Sprees latest attack, this time a swimming pool in Ohio with the sound being trapped inside of a pool float. The Spree agent this time taking on the form of a lifeguard. The float literally floats in the air, and upon exploding, causes the water to freeze over with everyone trapped inside. Talk about Cryogenics!

Back in training, the Witches cannot focus on their task, using wind strikes at blocks of stone. They have all learned of the Spree’s latest attack and a break seems necessary for all, including Anacostia. Out in the playing field, we learn that Alder has had to leave the Fort for an emergency meeting at The Hague, but we meet Junior Matrimonialist Berryessa Tansey (seriously what is with these names!) for the first time as she kicks off a nice traditional game of Lacrosse for opening Beltane. I guess the game is shirts vs skins because half of the males take off their shirts and the game turns into a wet t-shirt contest. Gerit Buttonwood is particularly taken with Tally who doesn’t know what to do. Raelle has a meeting of her own on the field with someone who claims she is bad at picking girlfriends.

After the match, Sylla gets her own meet and greet with the man who accosted Raelle who questions why she is even at Fort Salem. He sees through her as the two of them grew up together. We learn that Scylla’s parents were killed and that Scylla left her boyfriend, Porter, behind afterwards. We stan a badass bisexual witch! Our little coven is enjoying a little picnic together when Abigail is approached by Clive Garland, but she seems a lot more interested in his friend Augustine who is with Libba. That doesn’t mean that she will stop with just Augustine though as she drags the two men away with her. Raelle confronts Porter who tries to give her a warning about Scylla and tells her not to get too attached.

The Hague’s War Council of countries is in full swing. The council do not seem too impressed with Alder and America taking the lead. The Russian member releases a Seed from a Faberge egg which moves everyone with its beautiful long-forgotten sounds, sounds which run in Alder’s blood. Before we can learn anything else about why it causes these reactions,  we are interrupted when one of the Biddy’s falls ill at the table. This sets off a chain reaction with Alder ageing before our eyes and the fruits of the Fort instantly falling from trees and fouling. At least we know where Alder gains her strength and youth from! 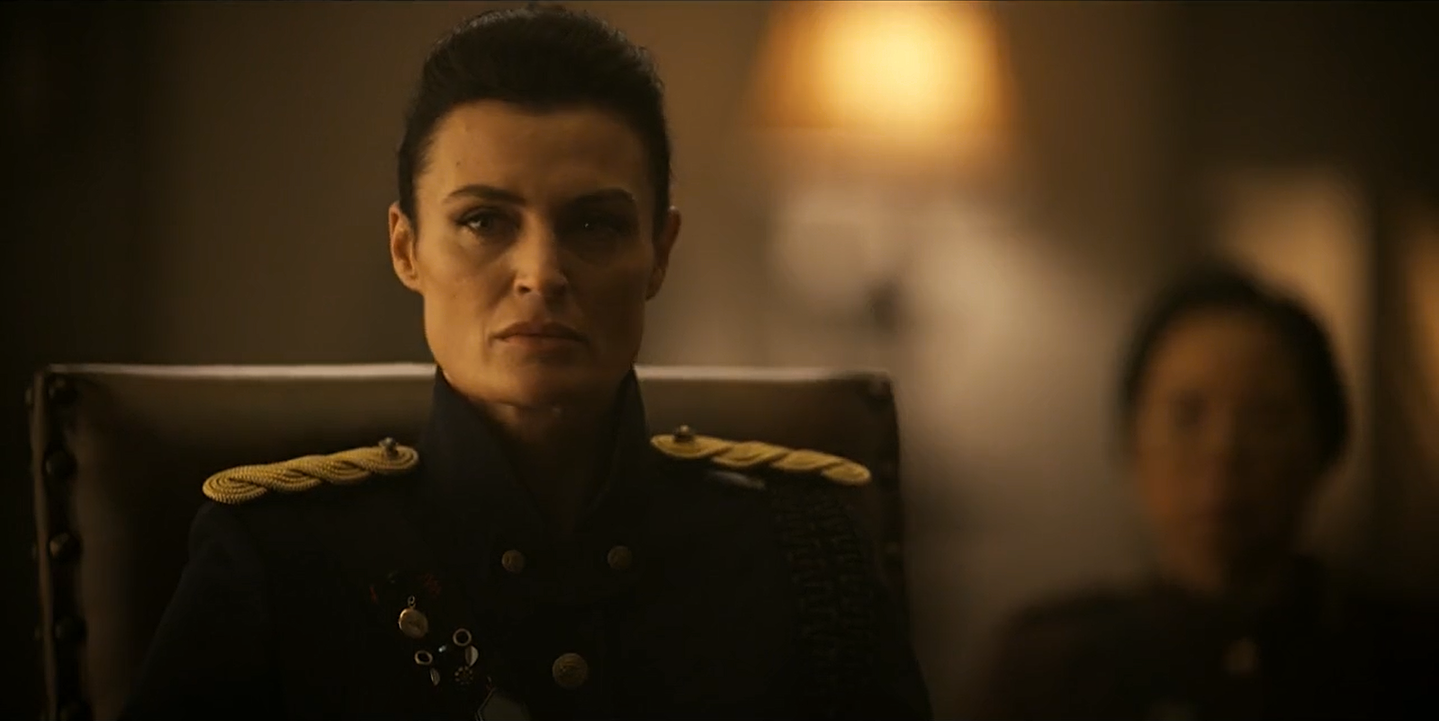 “Forget decorated everyone else, tell me about General Alder.” ― Christine McLaren

At Memorial Hall, we learn a little more about the Biddys. They fought beside Alder in the wars and are bonafide war heroes, Raelle finds the Biddy’s creepy, but Tally explains it is the greatest honour as they are chosen out of thousands to stand by Alders side. Alder and the other Biddys stand guard over their fallen sister and we learn that a replacement has been found. Abigail is having a guard of her own and is with the two boys at Memorial Hall celebrating all things Beltane with them both (at which point in my initial watch I shouted YAAAS QUEEN! because of course, it would be Abigail who is having a threesome at Beltane).

The flag in Memorial Hall shows the line associated with the witches medals. Tally’s reaches almost to the edge of the flag whereas Raelle’s goes in a straight line all the way down. Scylla surprises her and explains that her line would not appear on the flag. Libba, however, is holding court at a projector singing the praises of her family line. Abigail calls her out again and the battle between the two enters round two. Abigail explains that her ancestor, Gem Bellweather, held the line while Libba’s ancestor sung a storm and sacrificed herself, making her the real hero that day. Raelle and Scylla have a nice little romantic date going through the Museum which is Memorial Hall and look back on the darker burning days of witches and at all the exhibits showing the numerous ways in which the witches used to be killed. The tone is set nicely when Raelle confronts Scylla about Porter.

Scylla finally opens up to Raelle about how her parents and Porters parents were Draft Dodgers and that’s why they grew up together. Scylla finally reveals that the Army killed her parents while trying to arrest them. Scylla enlisted to try and get some justice for her parents’ death, and Raelle has decided that she will help. They agree to run away together if Scylla decides to leave.

Scylla receives a visitor at her room in the form of Porter who still doesn’t believe that Scylla is telling the truth about why she is at Fort Salem. He believes that she is part of The Spree because of the way she has always challenged the system Scylla turns it around though and makes him feel terrible and leading to the pair kissing. Scylla has a plan though and speaks a spell causing him to leave almost as quickly as he arrived.

Gerit and Tally are on their own little nature walk date. Tally thinks that there is something more to them, and we learn that Witches are not supposed to be monogamous but that they do enjoy spending time together. Tally takes a leaf out of Abigail and Raelle’s book and the pair kiss in the woods under the moonlight. How very Shakespearean!

The Biddy’s life has now come to an end and the others burst into a glorious song. She turns young again before our eyes! It seems that they only temporarily lend Alder their youth and vitality and it is returned to them once more at the end in thanks for their service. The song that they sing is truly beautiful and haunting. As one Biddy’s life ends, a new one begins and our new Biddy Bevan takes her place at Alder’s side, her youth transferring over. I haven’t yet decided if they take on the spirit of the original Biddys as there seems to be an instant connection between Alder and her new compatriots. 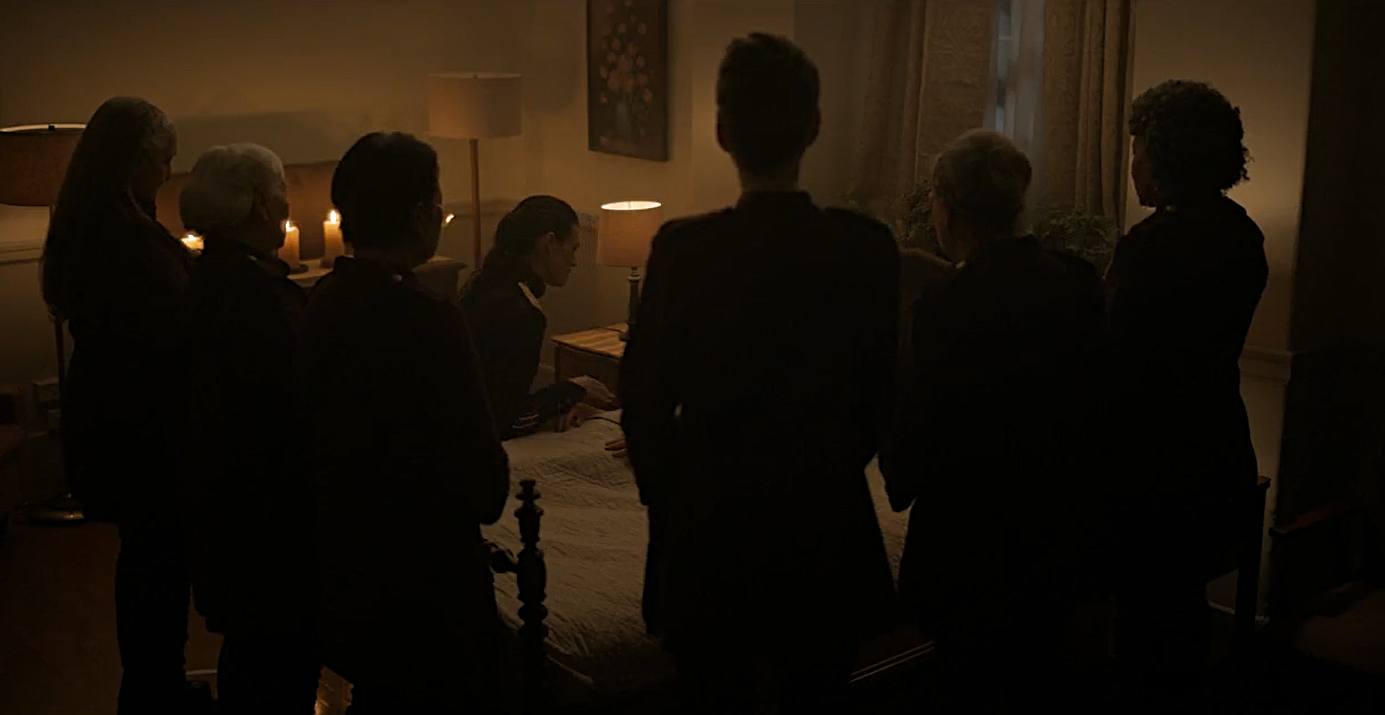 Are the Biddy’s just Alder’s Horcruxes? There are 7 of them after all!

The song continues over to Raelle walking up a path and having Porter jump from a roof in front of her. She frantically tries to heal him but is unsuccessful. Others appear to try and help upon hearing her cries, but she has used too much energy trying to heal him and falls to the side, seeing Scylla off in the distance before passing out with the end of the episode.

Do you want to know what I imagine will happen next week? (which have nothing to do with the promo because we all know promos show only a tiny snippet of one storyline) Well, there has to be fire, it is Beltane after all. Maybe our Junior Martiamonalist will get to have a larger role and will perform a commitment ceremony handfasting. I just hope that Ryella gets to be happy together because it is what Raelle deserves!