And that is a very brief recap of the first episode, now on to Episode 4, ‘Hail Beltane’.

After Porter’s spill from the roof and Raelle trying to save him, she lands herself in the medical wing yet again. Anacostia is there to meet her, but it seems that Raelle has been having visions of Porter’s death (who wouldn’t!). Everyone, including Abigail, is proud of Raelle and her actions.

Abigail’s mother arrives on base and tries to instantly make her mark. She asks Alder to cancel Beltane, something which absolutely no one wants. Beltane is something akin to what Christmas was on the Western Front. It is sacred and causes a ceasefire each and every year to allow for the holiest of holidays. Abigail’s mother has some news on how the Spree communicate. When they communicate through mirrors, they leave a residue and they decide to use Beltane as a cover to check every single mirror for this residue. Alder and the All-Father proclaim to all the witches that their attendance at Beltane is mandatory.

It took me two tries to get this one but boy am I happy that I managed it!

Upon leaving the medical wing, Raelle meets up with Scylla in the woods (Raylla forever!). Raelle has questions, lots of questions, and Scylla does all that she can do to dodge them and put Raelle’s mind at ease. It doesn’t work though as Raelle has a feeling that the two of them met up the previous night. Scylla tries to put the whole ordeal behind them.

Back in the Covens room, Tally is trying to choose a dress for Beltane and failing miserably. Gerit sends her a message on the back of a bluebird. A scroll of paper tied with a flower ring. The scroll it seems is their form of a dick pic, which Abigail sees. Raelle arrives home and instantly gets into an argument with Abigail over Beltane. Beltane is not Raelles party of choice shall we say, but Tally really wants her to go so that she and Abigail can partake in all things Beltane. She agrees to go to strengthen the unit, on the proviso that Tally chooses a different dress, breaking the tense atmosphere that has built up in the room. We finally get to see what the Necros get up to in their training. Porter is wheeled in and they are going to open a death current to see what happened in Porter’s last moments.

Abigail’s mother decides to try her luck again with General Alder, the two partaking in the age-old tradition of discussing things over a whisky. General Bellweather tries to find out more about the seeds coming out of the Faberge egg from the last episode. It seems that classified information does not like to stay classified around General Bellweather. The Biddys do not like this at all and start tittering behind the pair, with General Bellweather storming out after Alder takes back her whisky and downs it herself. Powermove anyone? Bellweather decides to pay her daughter a visit, affording Raelle a chance to finally confront the woman who she believes is responsible for her mother’s death. We get to see some of that pressure that Abigail was mentioning in a previous episode about living under her mother as she is not pleased in regards to the units rankings. It turns out that Bellweather has an ulterior motive and that she wants Abigail to bring her little coven along to her cousins High Atlantic wedding the following week.

Beltane is not only a time for frivolity, but it is also a time for the witches to be issued with a Scorge. The carefully constructed scorges have been made by the male witches, who each choose a witch to give it to. Abigail, of course, gets two while Gerit gives his to Tally. Raelle, needing air after a vision, tries to visit Scylla, however, she is not there and she is plagued by another vision of Porter visiting Scylla before heading up to the roof to jump off.

At Beltane, Raelle arrives late and is in a suit, a suit of epic proportions. (What? I’m a sucker for a woman in a suit!) Tally is distracted by Gerit sitting with another woman and heads off to find the Matriamonalist. She wants Gerit and is worried that they will not end up together in the dance. She explains that if they do not end up together then it was simply not supposed to be. Abigail advises that they are not supposed to be with the one person and that there are other men out there for Tally. Raelle is approached by one of Porter’s friends with whom she forges an instant bond. They discuss Scylla briefly before Raelle goes off to find her. Scylla asks Raelle to trust her and to stop asking if she saw him on the night he died.

The dance at Beltane is upon them with everyone taking off their shoes before dancing. The males and females all dance with each other and can I just say that Alder and the All-Father are GOALS here! I was dying to see Alder in this scene after seeing an image on Lyne Renee’s Instagram earlier in the day and it does not disappoint! I do not know how they all know the moves for this dance, magic is the only explanation, but it is truly mesmerizing with the bright colours, the most perfect song in ‘Higher’ by Ruelle. I really do need this song in my life. Tally and Gerit are trying everything that they can to be dancing with each other when the song ends, which they manage just in time. Abigail ends up with the two boys from the night before and Raelle finds her way to her new friend. 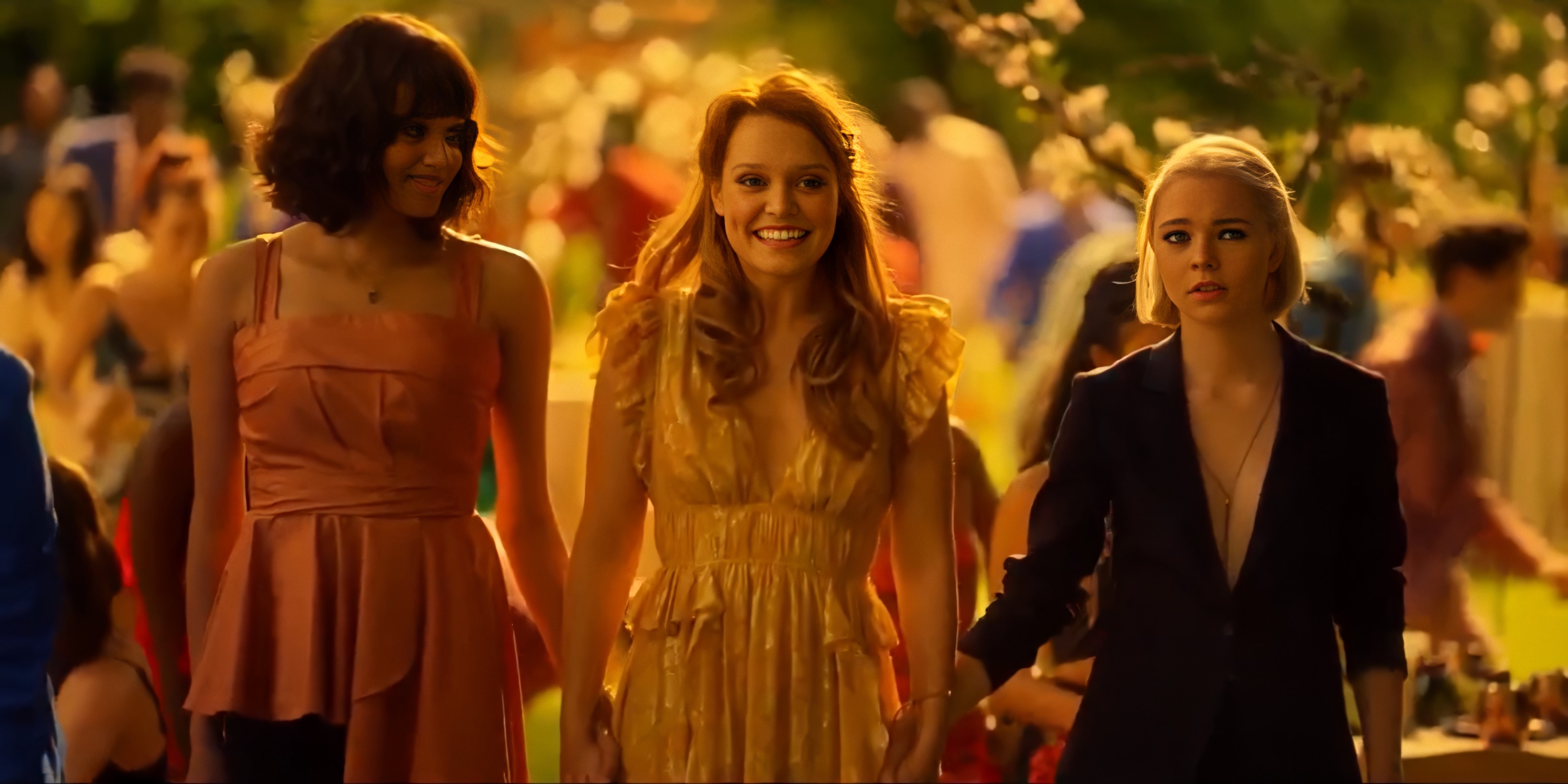 I stan one Coven

In the Necro morgue, there is less of a festive feeling. Scylla is back in her lab coat and is trying to sabotage the procedure that they are about to do on Porter by raising the temperature in the room to prevent it from happening. She is found before she can do anything else though, putting her entire plan at risk.

After the dance, Gerit and Tally are just as smitten on each other as they were the previous night and run off to find a little spot of their own to partake in the Beltane festivities. It is a festival all about fertility after all! Abigail has her two boys, Alder has the All-Father and is finding out is he is a true Scotsman under that kilt he was wearing and is guarded by her Biddys. Abigail is not content with the boys being all over her, they have to be all over each other as well. Can we say gay rights because this show has given the LGBTQIA+ community more representation in only four episodes than most shows do in their entire lifetime? Raelle and Byron have found a not so quiet patch all to themselves. He guesses that Tally received a picture in a flower ring. It turns out it is directly from a ‘How to romance a Witch’ guide. They discuss love and how to love someone who has made mistakes.

General Bellweather and Anacostia are busy checking all of the mirrors for the Spree residue while the Necros are busy singing their seeds to ‘awaken’ Porter. They find zero residues in Scylla’s room, but just after Bellweather leaves, a blue balloon appears. With the Necros, the canary makes its way down Porter’s throat and he awakens with eyes like a White Walker. The Necros question him, and it seems like Scylla had given him some amnesia and she is off the hook, for now.

The coven, after partaking in Beltane, is on their way back to their dorm room. Tally is being her usual self and is showing off her newly shiny Witches mark. Abigail invites the others along to her cousins’ wedding, with Raelle agreeing to go before disappearing off to see Scylla. She comes clean with Raelle over Porter visiting her that night as he wanted to get back together with her. Raelle listens as Scylla opens up about how she feels about her and is cut off with a kiss (as always happens) and tells her that they will figure it out together.

The framing. The light. The flower. I LOVE EVERYTHING ABOUT THIS SHOT!

It is time for the boys to leave. Bryce gives Raelle the Codices, the ‘How to’ guide. The All-Father also has a gift for her, the Scorge that Porter made. It seems that Beltane was a success with Alder proclaiming ‘Beltane Matters’ and that there were no attacks. The witches have their daily training to complete and don’t have long to finish their goodbyes. Abigail didn’t need goodbyes with the men she was with and is instead practising with her Scorge and has yet another faceoff with Libba. Raelle takes her turn with the Scorge and demolishes the stone training dummy, showing that she can handle herself and prove everyone wrong.

Ryella meet up again after training, but it isn’t Raelle. She starts choking Scylla and burns off her freaking face. The Spree is more ingrained in the Fort than we realised as Scylla is threatened and told to get herself invited to the Bellweather wedding.

I adored this episode. The dance sequence was truly stunning! I wonder how long that took to get the choreography together like that? Anyway, this episode was stunning and next week we are off to a High Atlantic Wedding!