I guess I am kind of good now at four bullet-point summaries, now on to Episode 5, ‘Bellweather Season’.

In the first two minutes, we have everything set up for this episode (recap outstanding). We learn hat the Coven are leaving after training to attend Abigail cousins wedding where they will also have their pre-interview with The Dean of War College and that they may end up top of their class with the marks they have been getting, making them a shoo-in for War College. Tally chimes in and tries to introduce another conversation, that of Gerit using the Codices ( what I call ‘The book of Game’) as he used every move in the book on her at Beltane. Abigail and Raelle, however, are not playing and are still on the topic of the wedding of the High Atlantic season. as Scylla has not been added to the list for the wedding. Raelle refuses to go if Scylla cant go. From a quick line, we learn that Witches have more than one father

Raelle gives Scylla a bird skull corsage that’s ‘sexy weird ‘ after talking about running away together to a beach. Scylla convinces really to go to the wedding and they’ll run away together afterwards to somewhere safe, but nowhere is safe for Witches. Scylla carves an ‘S’ in Raelles hand because she wants to always be able to say hi to her. if this entire scene doesn’t shout ‘gay’ then the bridal carry and the kiss will point you in the right direction! 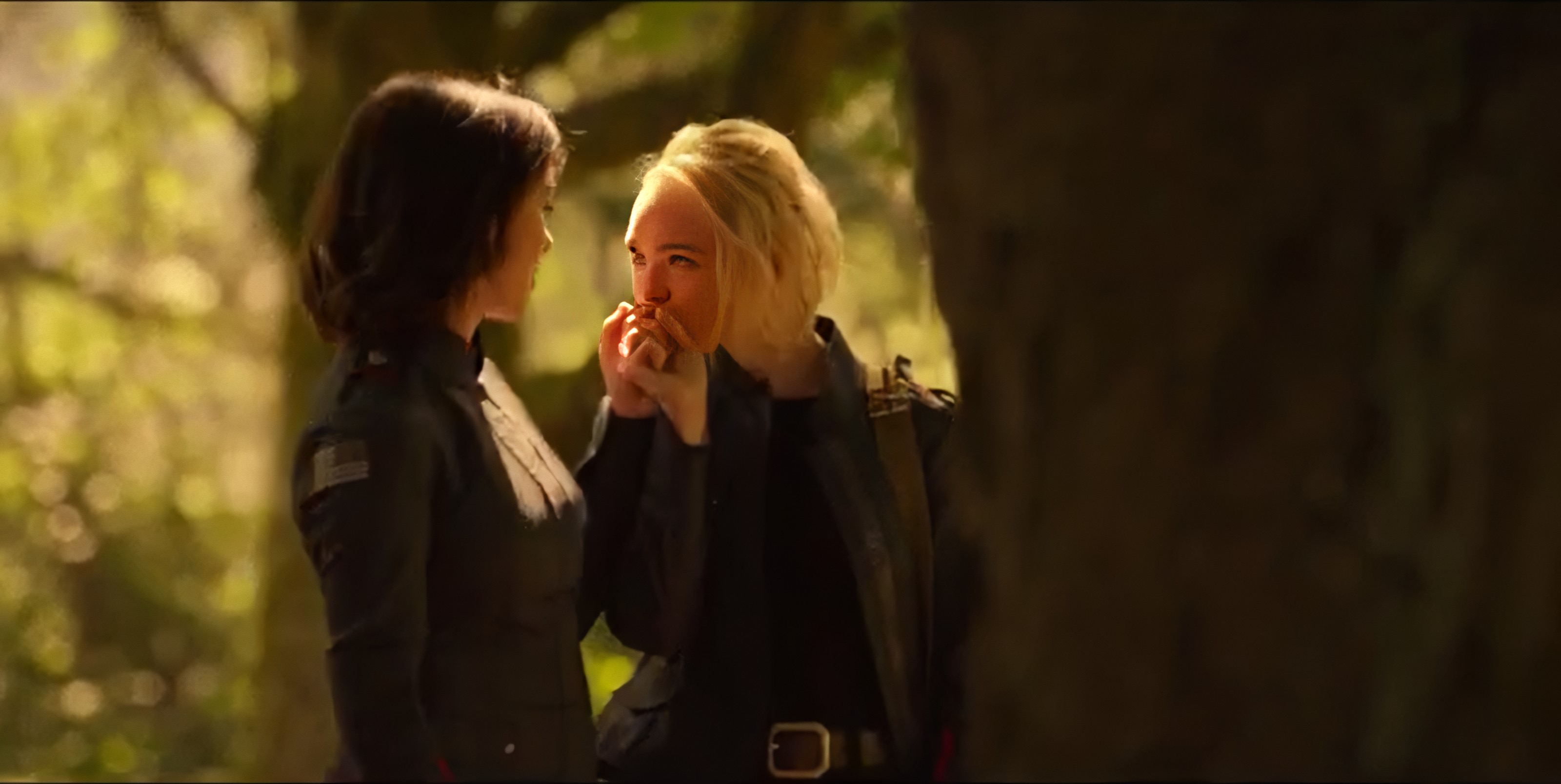 Aren’t we all suckers for tiny little moments like these?

Scylla goes back to her room and the blue balloon starts talking to her again in the mirror telling her she must go to the wedding and that they are expecting her to bring Raelle to them at 6pm sharp otherwise her life is in the balance. but in a weird way, they still give Scylla a sense of ‘agency’ in that it is her choice if she brings Raelle to them, not that they think it is much of a choice.

At the Bellweather home, majors start pulling up in old fashioned cars bedecked in their uniforms. Petra welcomes her guests and a waitress gives them all champaign then disappears with a tray of hors d’oeuvres, which she quickly ditches before burning her face off to become Scylla who is waiting for the coven.

They enter the wedding and Abigail is instantly berated by Petra, ever the overbearing high achieving mother. She explains she was having ‘shitbird issues’ before introducing the coven to everyone and informs Tally and Raelle they should consider themselves part of the family before the ceremony starts. They all exit the house two by two and take up their stations around a swirl made out of flowers.

After watching shows like ‘Wynonna Earp’ and on the back of watching all the appendices of ‘The Lord of the Rings’ and ‘The Hobbit’, I am more keenly attuned right now to the music playing in the background. This one is ‘Urchin’ by Labyrinth Ear and gives such a fantastic sense of excitement yet feels otherworldly and secretive.It has the amazing lyrics ‘The Strong knot was to show you that I cared’ which for a handfasting is completely appropriate and fitting. From what I can see, the music is by Brandon Rogers so I tip my snapback to you! (or if I am wrong whoever it was who chose the music for this scene)

Witch weddings are very different from ‘mortal’ ones. The knot has all the knots from the previous Bellweather weddings and is a wedding which lasts only five years! The knot is soaked with water from a conch. The ceremony is quick and complete after this and the party can commence. Abigail, however, cannot party and is left to mingle while Tally, Raelle and Scylla have found the champagne and buffet table filled with cakes, fruit and lobster.

Petra and one of the other Generals start speaking about my one and only love, General Sarah Alder, and all but start planning mutiny by saying its time for a change. They don’t realise that Anacostia is nearby and listening so of course everything will get back to General Alder and their little coup will be squashed faster than they can fashion a wind strike.

It is nearing closer to 6pm and Anacostia has found our little Wedding Crasher. Tally drags Raelle away leaving Anacostia to issue another threat to Scylla. She tells her Raelle doesn’t need her and that she has taken advantage of a new recruit. Like that will stop true love! Tally, however, has found a blue sash wearing Gerit, who she rushes off to see. Abigail reveals to Raelle that the blue sash means that he is engaged, the reason for the blue sash. Tally though pulls him away into the bushes for a reenactment of Beltane. She confronts him though about the Codices book. He declares that he wants to be with Tally only. Abigail is more tightly wound than normal over the interview with the Dean. Abigail wants to make a good impression though but her cousin tries to puts her at ease by telling her all she needs to do is simply introduce herself and the Dean will do the rest. Abigail needs a little pick me up and disappears off with one of the men who are attending the weather because as we all know in the Witch society, sex is power. The conch blows for an announcement, the announcement that Gerit is engaged, leaving Tally devastated seconds before their interview. Tally disappears with Raelle close behind to check on her leaving Abigail behind. The Dean however only needs the briefest of introductions and says Abigail would be into War College sleepwalking.

Raelle, after leaving Tally to her thoughts, finally confronts Petra over her involvement in her mothers’ death, however, Petra turns it and states that Willa was the best of the best and tells Raelle that she wishes her mother were still there and that she would be proud of Raelle, who then disappears. Abigail is helping her cousin with her wedding dress. She says that when Bellweathers are not winning wars they are busy coupling up and having kids to further the line, even doing so while being deployed to battle. They discuss war college and her cousin tells Abigail she will reintroduce her to the Dean so that she can make sure she leaves the best impression she can to get on the list on her own merit.

Tally is hiding alone in the bathroom when someone enters. After peering through the door she realises that it is Scylla and that she is talking to a balloon in the mirror discussing an extraction point for her and Raelle. Raelle, however, does not want to go anywhere and she only wants to dance with her girlfriend, causing Scylla to miss her window. Tally finds Anacostia and tells her that she saw a balloon in the mirror talking to Scylla. 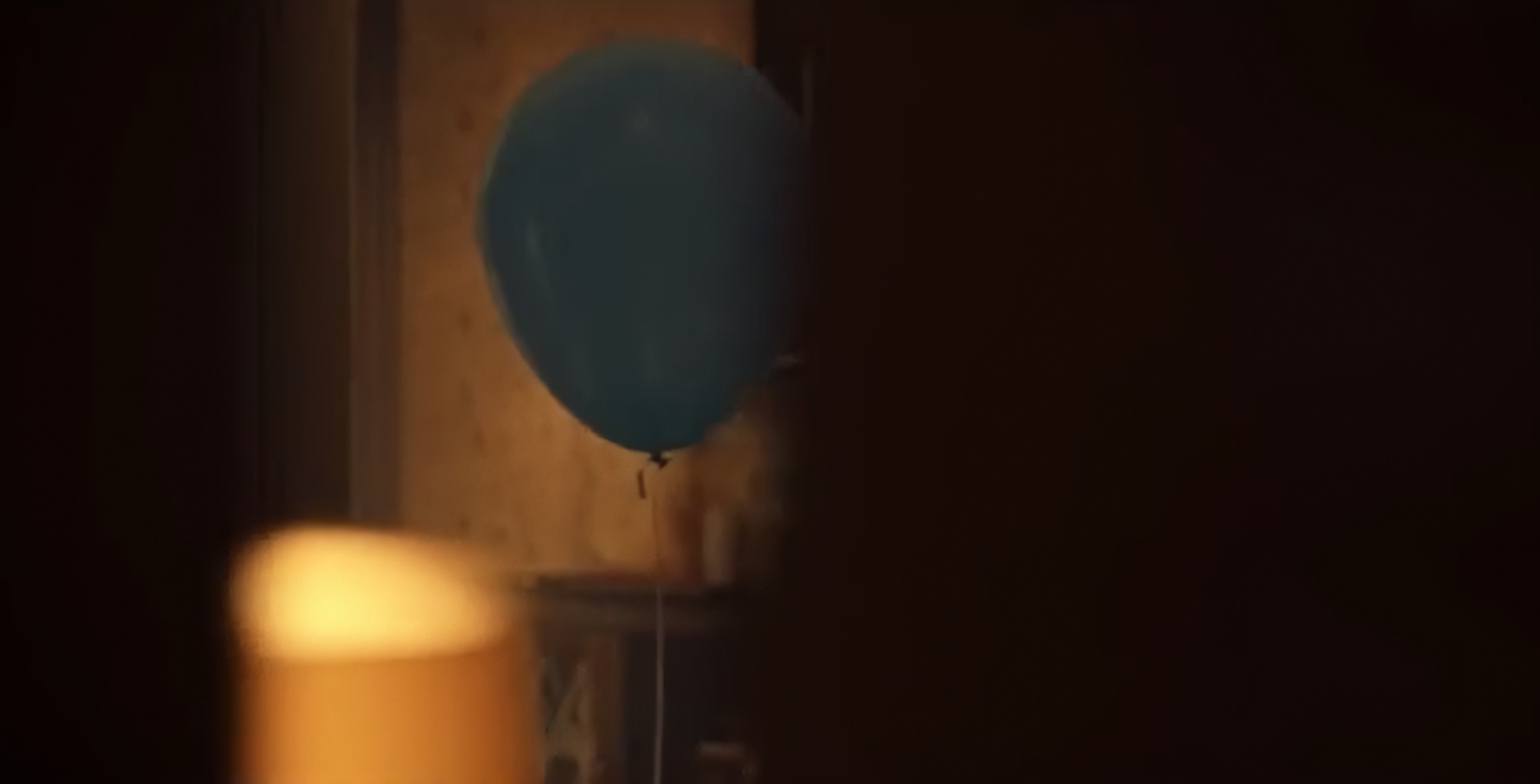 I think I’d be REALLY worried if I started talking to a blue balloon in the mirror.

We are then treated to am amazing flashback scene of their moments from the previous four episodes including flying while high, in bed together and lots of kissing. The 6pm bell tolls and Scylla stops dancing very briefly, at peace with the fact that she still has Raelle and the love they share. Is there anything better than seeing Ryella dancing at a wedding?

A little warning, don’t watch this next part while eating like I have done the past two times I have watched it.

Abigail, upon finding Charvelle lying dead in a bathtub with blood dripping down her and her throat tore open, is laid upon by Spree Agents who have cut off her ability to sing any seeds. She is left with only hand to hand combat and she is seriously outnumbered. Petra has discovered a problem of her own, blue balloons heading straight for the party. They summon a tornado, with the seeds sounding like a tornado warning which I thought was pretty cool. Tally and Raelle are left to try and get everyone inside while looking for both Abigail and Scylla.

Petra heads off to the Guest Bedroom and finds the Spree agents seconds from slicing Abigail’s throat. Using her Scorge he manages to distract them and the numbers are slightly more even but Abigail is stabbed in the shoulder in the process, The Spree douse themselves in in gasoline and set themselves on fire. Turns out they can only survive a ‘minor’ burn but larger ones amount to suicide. I guess no amount of Aloe can cure that, only being hurled through the windows and into the tornado awaits them. The Witches are left to their healing and finding the missing. Tally and Raelle still can’t find Abigail or Scylla when Abigail walks out and Raelle finds Scylla’s corsage. The three of them huddle close, all suffering loss in this episode and now only have each other.

NOT MY DAUGHTER YOU BITCHES! – Petra probably

This is the first episode which does not include General Sarah Alder and let me tell you, it pains me to not see her. I hope that this is the only episode in which this happens, but it seems like things are only going to be stepping up for our little coven as the season moves into its final act.

So if you are on Twitter, you will have seen that people are making a LOT of noise just now about this show. It is simply because we are now halfway through yet there has been no word of renewal yet, so do what you can. Tweet loudly, create fanvids, make fan art, do whatever you can, but let us make sure that we can do everything in our power to ensure we get a season two.