You have waited longer than usual (for that I apologise but self care you know) so on to Episode 7, ‘Mother Mycelium’.

We open with General Alder questioning Scylla but Scylla has some fight in her yet and bites back. Anacostia brings her food, urging her to tuck into her lunch. Scylla has a few mouthfuls before the food turns into glass and cuts her mouth to shreds but its a glamour, the plate is empty. Don’t you just love food torture! General Alder loses it while Anacostia tries to use Legilimency on Scylla, but she obviously knows Occlumency and throws her out her mind like Snape did to Harry. (Can you tell I’ve been reading a lot of Harry Potter fanfics lately?)

While walking in the base to go to breakfast, Raelle is continuously distracted by memories of Scylla, like her dorm room window.  Adil meets the witches for their meal and is definitely is not used to cereal dumps (is that what they are called, if not that’s what they are called now). After being shown the ropes by Abigail, Raelle walks off for some time alone while Abigail and Adil continue to make heart eyes at each other. You must admit, there is quite a bit of magic between the two of them.

Adil’s sister, Khalida, has a terminal case of some weird Non-Coronavirus which causes black tendrils to creep all over her. It seems to attack her lungs and makes her sing horrible seeds which shatter glasses all around the fixers.

In basic training, the coven is learning about how to heal someone after they have had their neck sliced open. Linking, as it is called, is about joining up your breathing and heartbeat to someone else in order to become attuned to them to heal them. I figure this would give any witch some trust issues. Raelle is partnered up to practice with someone who clearly thinks she is a freak after falling for Scylla. Raelle uses her usual method, using an incantation of sorts, to try and link up. Her partner is freaked out by her ‘Christopagan nonsense’  causing Raelle to become angry and overpower a spell to make the entire room take an enforced nap. 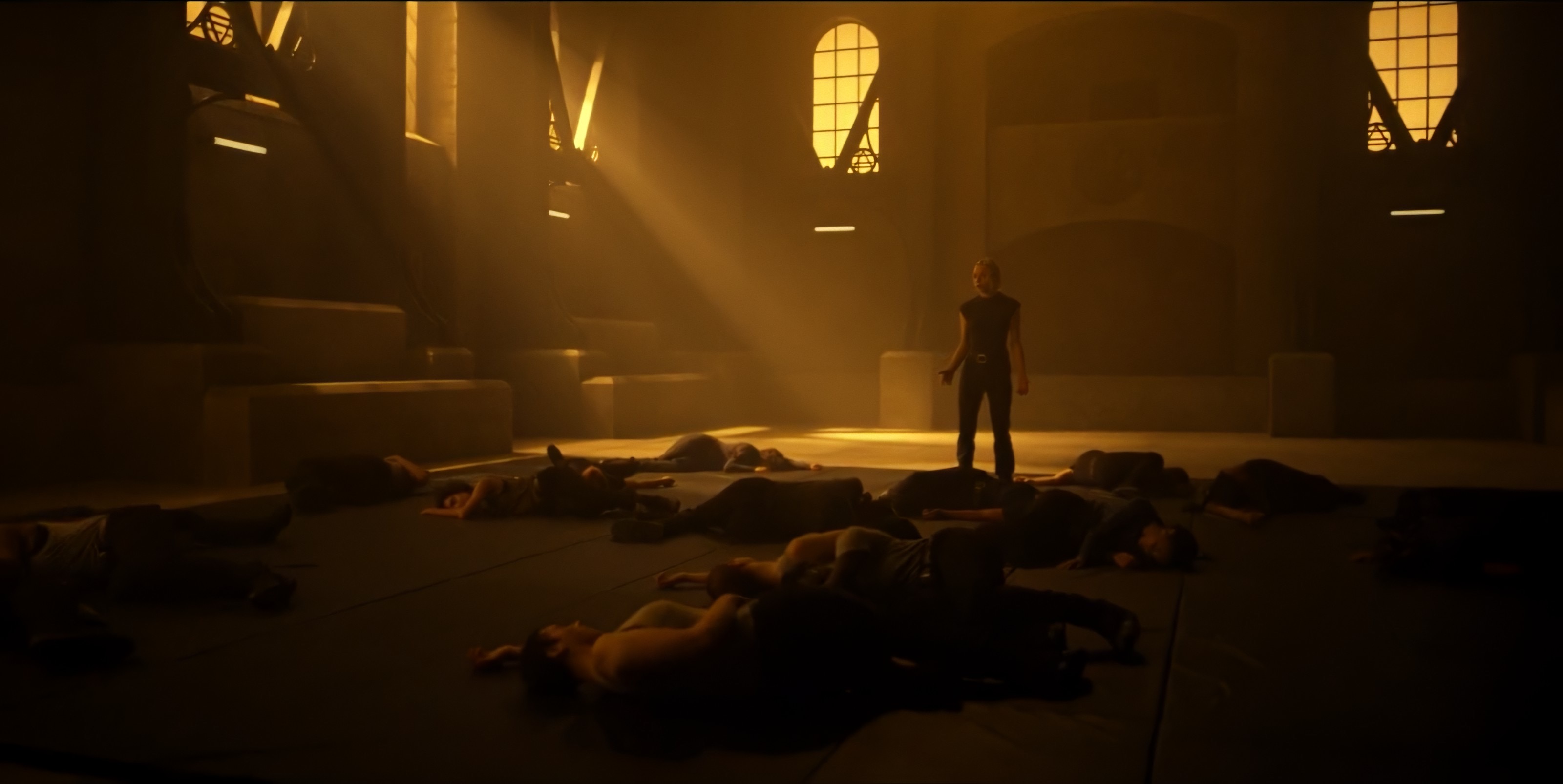 Izadora reassures Raelle that all the witches are there for her and that if she leans on them that it will be her strength, just as Scylla tried to tell her back at the beginning of their relationship. After their nap, Abigail makes sure that everyone knows that Raelle just put every single one of them on their ass in two seconds flat, making her the baddest witch around.

The boys are back in town! Yup, The Witch Father brings his men back to build and modify weapons. They did not have an easy journey though. The tides seem to be turning against the witch army as the police are roughing them up and the Spree are becoming bolder in their reign of terror. Even the Accords are in trouble.

Gerit is one of the men back in tow, his new fiance trying to steal him away before he can talk to Tally to apologise for the wedding who quickly calls a rain check. Raelle gets her own visitor who realises that one of her fingers is not right, the one that touched the veil and tries to get her to have it looked at.

Abigail ditches her two men and goes off in favour of looking for Adil, who she finds drawing blessings in the dirt. She adds her own, a smiley face emoji. They go on a walk and Abigail finds some witches summoning tornados. She wants to be like them and tells Adil as much. He, however, is not impressed and tries to walk off, explaining that the work that the switches do has consequences, like crop failures and plagues. A helicopter (Bat) flies overhead and scares him off before they can flirt some more.

Back in Torture Chamber number one, Scylla is tormented by an open box emitting a horrible seed which forces her to cover her ears in pain. It hasn’t wiped her out though and displays a miraculous head slam against Anacostia, saying that the Spree protects their own.

Abigail catches up to Adil at the hospital wing who explains that his people are targeted for their songs. His people are being murdered and taken, and Abigail sympathises. She offers to wait with him while the try and fix his sister, Khalida. Alder and the Biddies are in attendance. The three fixers each sing different seeds to heal her until one of them sings an off-tune one causing a maelstrom of sound and wind in the room. The Biddies rush to protect Alder while blood pours from the eyes of the fixer who failed.

Adil, losing hope, opens up to Abigail who tells him that Raelle can fix his sister. The coven meets up with Adil and Khalida in the woods. They come in under a disillusionment spell but Tally can see through it. It seems like each of our coven have special gifts. Raelle gives fixing all she has. Her first attempt seems to make it worse with the black tendrils overtaking Khalida and a maelstrom opening above them. Raelle thorough, not one to give up, tries again and they all start wiping at the black to move it. This time it seems to have worked, and in the process, it has gotten rid of whatever annihilation fungus was on Raelles finger. Khalida seems to know exactly who Raelle is and thanks Raellefor saving her. Raelle is confused though as she always takes on some of the illness, but she hasn’t. Abigail though seems to think that it is simply that Raelle has gotten stronger.

Izadora is back at Necro Base and is opening up a mushroom, only to find black tendrils. After checking the veil she realises that the plague has infested it. Khalida claims that she just woke up like that and that it is a miracle, alder knows better than that and knows something is afoot.

Gerit decides to pay Tally a visit in her room to try and be friends.  He says Tally can tell him anything and grabs her hand. Of course, the two of them cannot stay apart for long as Tally has hearts in her eyes whenever he is around.

It is romance all around though as Abigail is taking a walk with Adil who she tries to convince to stay. He casts the disillusionment seed on her and they disappear into their own little pocket dimension. After they kiss though, in their own little universe, Abigail screws it all up by bringing up what the military can do with those seeds and he storms off. 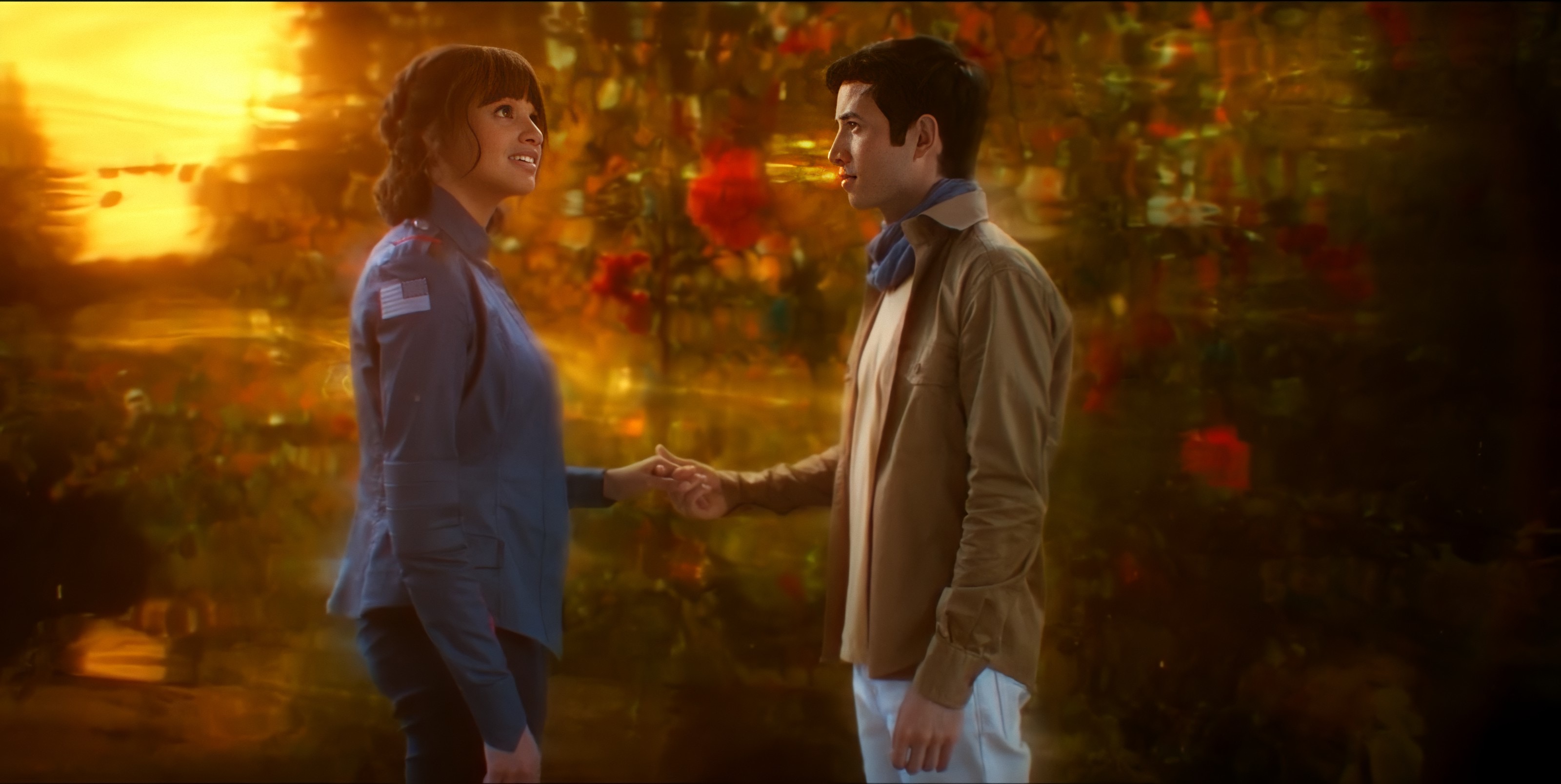 It is time for a nighttime dorm raid led by Anacostia who ensures Tally and Abigail are sound asleep before kidnapping Raelle from her bed to take her to torture chamber number two to visit Scylla. Naturally, Raelle doesn’t believe at first that Scylla is still alive and thinks she is dreaming. Are you ready for some Emmy award-winning acting? Well, I hope it is an Emmy award-winning performance. Raelle and Scylla sob into each other and Raelle can’t stop kissing her and touching Scyllas face while Scylla tells her not to listen to what anyone tells her. After exclamations of love, Raelle is dragged away and knocked out by Anacostia. The move breaks Scylla who doesn’t have enough time to put her shields back up before Anacostia breaks into her mind. 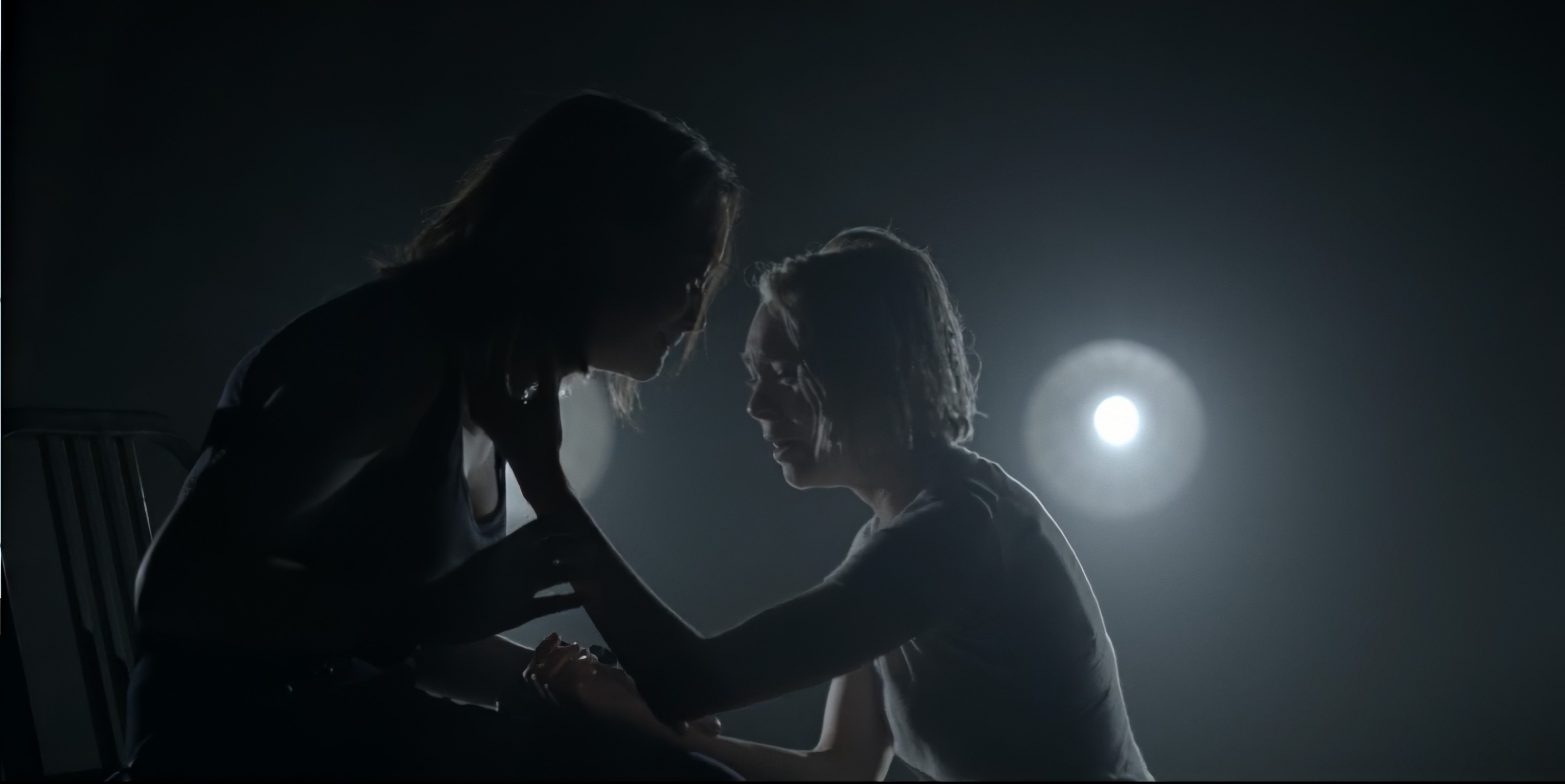 Just take my heart and cut it into tiny little pieces

In a little flashback scene, Scylla is heading off to see the Spree and convinces the janitor that there is no 6th floor.  ‘The way out is in, the way over is under’ is the Sprees motto and it seems to be an entrance code. Scylla asks for her own vessel and is given a balloon to break her in and leaves with the balloon, heading off to a car and setting her face on fire to become the Spree agent from the mall attack on conscription day.  Surely people see it when they do that. Anacostia uses the sprees own words on Scylla after she breaks down with them knowing the information. Anacostia catches up with Alder who alerts her to where the Spree is hiding. Anacostia though is starting to feel sorry for Scylla after learning that Scylla waivered and felt regret over the attack.

Raelle wakes up back in her own bed in the dorm and instantly wakes Tally and Abigail up, telling them all about her nighttime adventures and telling them that Scylla is alive. Surely they must think that she is the witch who cried wolf by now. Regardless, they comfort her to the fact that it was just a dream before Anacostia barges in and informs them that the City Drop starts now.

Alder finds Khalida in the greenhouses and tries to convince Khalida to teach her the songs she would like to know. Khalida starts to sing and Alder is overtaken with emotion and joins in. The two of them make a beautiful chorus but it suddenly turns sour with Khalida causing the plants to wither and die and assaults Alders vocal cords. She declared that the songs are not safe with her before leaving her in agony on the floor.

The Bats are flying off for the city drop through a storm. Abigail reassures her team while Swithe amps her team up for the drop. Its hoods up and time to get high with all six witches jumping out of the Bat with no parachute. Better hope that Salva lasts you until you reach the ground! 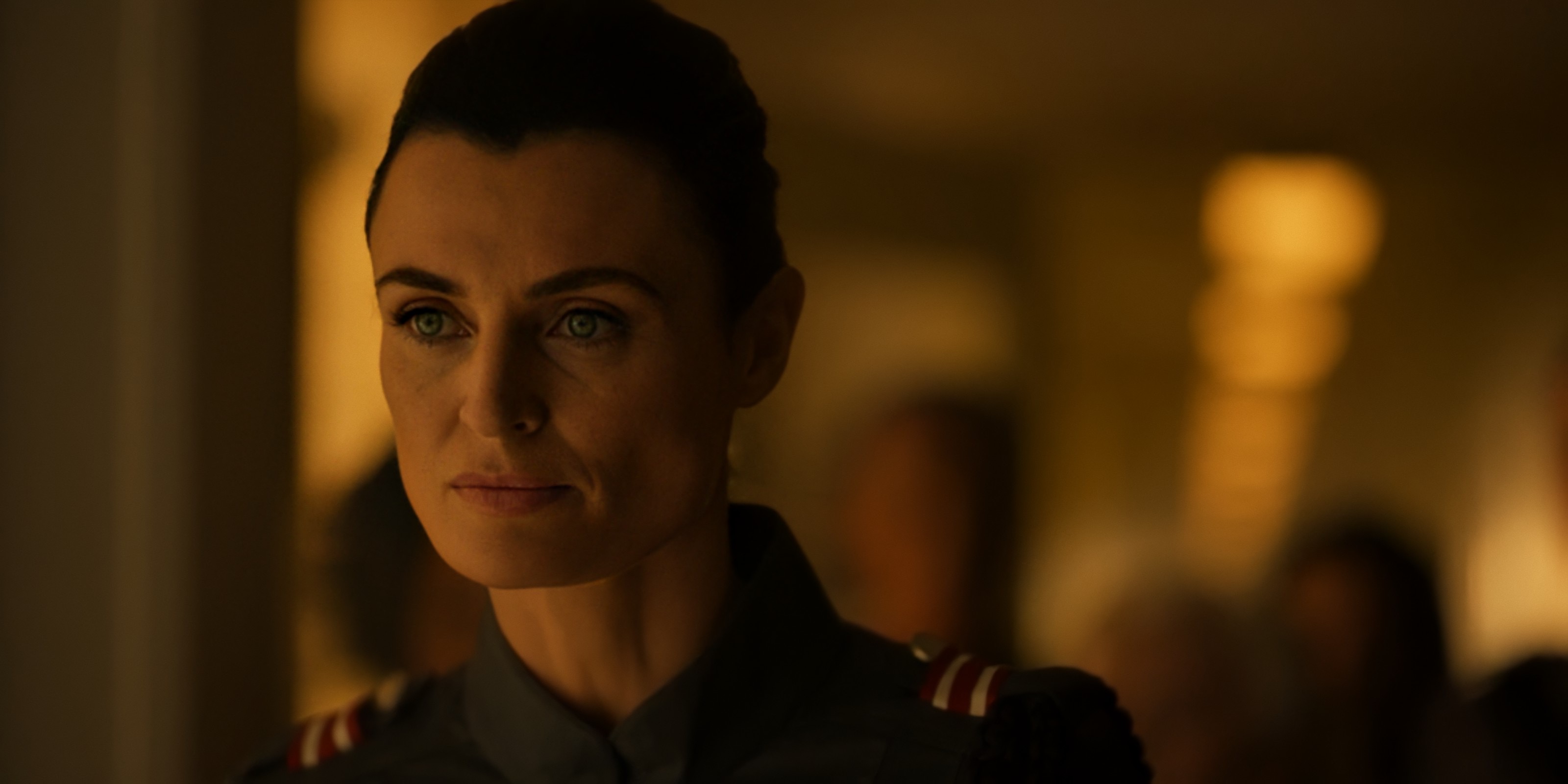 Here is a bonus General Alder for you. I was so distracted by Raylla in this episode that it consumed everything. Understandable though as that acting was stunning!

And that is it for this recap. If you follow us on Twitter you will see the reason why I needed the extra time for this one. Sometimes a girl just has to take a second for herself you know! (Plus I have been escaping lockdown via fanfic so that is taking up a lot of my time). Stay tuned for our next recap which will be on time. Only three more episodes to go, oh how time flies (no Salva required).