Oh, how a week passes by quickly when you are playing Animal Crossing for 8 hours a day every single day (no I don’t have an addiction! I’m just paying off those stupid loans and hadn’t unlocked Turnips by last Sunday). There’s been a lot again in fandom life so here is a round-up of everything we have found interesting in the past week. This is by no means exhaustive, we’d be here till next Friday if we did that, but there are a few things to look out for this weekend.

Don’t worry, we got you Sestras!. The original cast of Orphan Black is reuniting this weekend for a live event on Facebook with a table reading of not one but TWO episodes! The event itself is in aid of Center Link and Sistering.

The reunion will stream live on the series’ official Facebook page on Sunday (May 17) at 3pm EST (or 8pm UK time if you are like us and always seem to miss out on these cool things!) You can set a reminder for the event on Facebook by clicking on the link in their announcement tweet below:

This Sunday, May 17 at 3pm ET, the original cast will reunite live on the official Orphan Black Facebook page for a two-episode table read benefiting @CenterLink and @SisteringTO.

Are you upset all of your favourite conventions were cancelled this year? Us too! Wish you could attend a convention while in quarantine? We are with you. Want to support Queer Media while you do it? SIGN US UP!

Dana Piccoli and Tagg Magazine have joined forces to bring us a one-day convention filled with all the goodies we have come to love with conventions in one jam-packed day while with the aim to raise funds for Tagg Magazine to help them stay afloat in these trying times.

May 23rd is the day set aside for this endeavour with more information to come so keep your eyes on @TaggMagazine and @DanaPiccoli for the latest updates and on how you can donate and take part.

The Girls of Summer 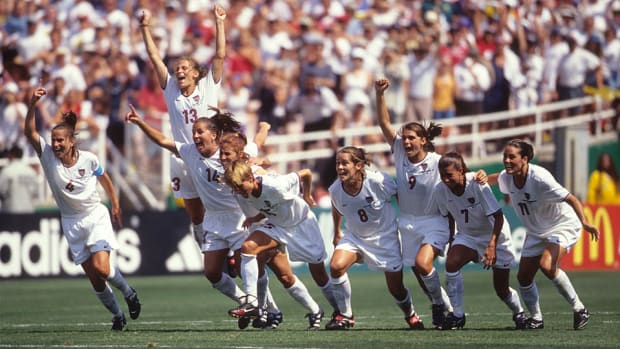 Ok, so we don’t know if this is going to be the actual title, but Netflix just scored the rights to “The Girls of Summer: The U.S. Women’s Soccer Team and How It Changed the World” by Jere Longman’s. Yes, they are making a movie about the 1999 U.S. Women’s Soccer team! We don’t have a lot of details yet apart from who the producers are, but we are beyond excited! Watch the announcement video below:

What's the 1999 World Cup winning US Women's Soccer Team up to now?

Mark your calendars for October 2020 because that is when season two will be dropping on Disney+. Not only that but Katee Sackhoff, who voices Bo-Katan Kryze on Star Wars: The Clone Wars and Star Wars Rebels, will be reprising her role for live-action, as confirmed to Slashfilm and her filming has not been hindered by the current pandemic, as they report that Sackhoff filmed her role back in February before Hollywood production shut down.

We have more Netflix news for you this week. Do you love Queer Eye? Have you been dying for more episodes since Queer Eye: We’re in Japan? SO HAVE WE! The wait is almost over as the Fab 5 will be back on our screens with 10 new episodes on June 5th and are back stateside in Philly! We are so ready for more heroes, more guac, more transformations and yes, more tears, so get your tissues ready and get ready to shout ‘Yaas Queen!’ at the screens. Check out Deadline for some more first look images released with the one above.

We all know that Coronavirus is messing up our fandom lives, but the CW has a way to corona-proof its fall schedule. In a media call to reporters on Thursday, Mark Pedowitz’ (Network President) announced that the network will air its acquisitions in the fall and moving ten of its own shows to January 2021 with a further 7 airing midseason – which could be anywhere from April to June 2021. We already knew from prior reports that the CW was not planning a Crossover event on such a large scale as Crisis on Infinite Earths was (mostly due to the fact that it took four years to build up to that event) and will instead be pared down to a two-episode crossover between last years newcomer, Batwoman, and the new Superman & Lois.

I sure will miss setting my calendar in October for all of my favourite CW shows return. The good news is that the acquisitions include Canadian drama series Coroner, as well as Swamp Thing.  Check out their schedule below and don’t be alarmed by the lack of Supergirl. Supergirl is slated for midseason 2021 and will return to filming at a later date Melissa Benoist (Supergirl) returns from maternity leave.

After years of waiting, Percy Jackson is heading back to our screens! After the acquisition of 20th Century Fox last year, Disney+ acquired the rights to this series by Rick Riordan, and in a video last night to fans, Riordan announced that a live-action series is in development for the streaming service and it is set to start from the initial book of the beloved series, Percy Jackson and the Lightning Thief in Season One. Not much is known, but Riordan confirmed that he would be involved in the process and in every aspect of the show.

We cannot wait to see who will be cast in this show and to see the show itself. It has been too long since we were in the world of Camp Half-Blood and of demigods.

And just a quick update on Homecon 2.0, Panelists will include the Rated R Superstar…Edge who will join the Vikings panel, and there is even a special surprise due after The 100 panel on Sunday from Katie McGrath.

There will be a #KatieMcGrath surprise after "The 100" panel on Sunday.🕺🏽💃🏽 pic.twitter.com/z5kfXGv6sD

And that is all the news we have for this week. If you want to catch up with us this week, we will be working on our day jobs on Saturday (boo!) as well as geeking out at HomeCon 2.0 after work, watching the Orphan Black table read and Azie Tesfai’s IG Live for Covid-19 (which promises to have an awesome live lineup – maybe Katie McGrath will join despite having no socials?)  and then attempting to watch both Batwoman and Supergirl live for their season finales. Hope to see you all next week for another news round-up!